FC Dallas shouldn't lose to Chivas, even given their current form.

I read someone, I think Drew Epperley, say on this blog this week that nobody ever said rooting for FC Dallas would be easy.

Over the past few weeks, it has actually been really, really difficult. A team that started off so hot has faded just as fast. Considering that the Hoops have lost their previous four matches and with road games against LA Galaxy and Real Salt Lake looming, three points are crucial on Saturday night at Toyota Stadium.

Even more-so than FC Dallas, FIFA14 (for Playstation3) doesn't seem to like Chivas USA very much.Their team is one of the lowest-rated in the MLS in FIFA. I wasn't taking anything for granted though, since I'm still not very good at this maddening video game.

My mantra coming into each game is, "Don't be a masher," or "Maintain possession." Halfway in though, I can't help it, especially when the computer is keeping the ball away from me. Getting an early lead definitely helps though.

Texeira back on the board

Six minutes into my matchup with Chivas, David Texeira got Dallas on the board. A through-ball from Andrew Jacobson led to a one-time chance that Texeira buried into the upper right corner of the net. It was a precise strike from a player I haven't seen do that much so far this year -- in the game or in real life.

While Texeira found the back of the net, Blas Perez failed to convert on a number of opportunities. If even one of them can find a way to get on the board on Saturday night, FC Dallas' chances will improve exponentially. 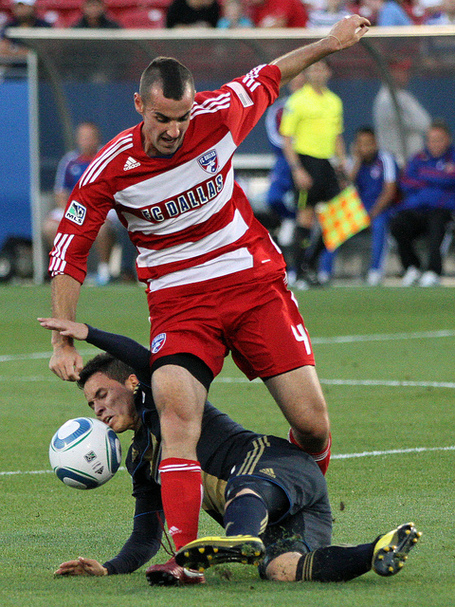 Andrew Jacobson played great in the video-game midfield -- I mean really great. The 28 year-old was controlled on defense and took his offensive chances well. He didn't take a single shot, but set-up at least 3-4 throughout the game and really made a difference all over the diamond-shaped midfield in Dallas' 4-4-2 (again, the formation the video game has defaulted to since the Diaz injury).

Jacobson or Adam Moffat or whoever fills the midfiled void will have a lot riding on their performance. For guys who are known more for solid play than play-making, a confident, assured game will be a must.

Yes, I used Mauro Diaz again. I'll admit it. Again, I'm not that good at this game yet and I need all the help I can get to keep this thing kind of realistic.

Mauro scored FC Dallas' second goal in the 45th minute, again on a through-ball from Jacobson. It was the kind of calm slotted-home shot the team really could have used last week against San Jose. They'll need someone to fill that role this week. I can't wait to see who it is.

Everyone knows how much of a mess Chivas is. Real life isn't a video game -- Chivas has players who are professionals and who will come to Dallas to steal three points. If Chivas gets a lead, I would bet on it being tough for Dallas to come back.

Yes, I used Mauro Diaz again in my PS3 FIFA14 preview, but I didn't use Hendry Thomas. FIFA14 inserted Walker Zimmerman into the starting lineup, and he was the player of the match according to the game. I see this game as a chance for FC Dallas to really get out of their funk and re-establish themselves, even if only for one solitary home contest.

Perez or Texeira will score. So will a midfielder. The Dallas back-four play great for a night and FC Dallas wins 2-0 over Chivas USA.