Barely made the team, now a starter for the Hoops? Let's look at Dallas' Homegrown Victor Ulloa's stats.

Share All sharing options for: Scratching the Chalkboard: Time to Start Ulloa

I've been unapologetic with my love for Victor Ulloa and what he brings to the team with his composure on the ball and clean passing from the middle of the field. I've been saying he's fast becoming my favorite player on the team and I think I'm ready to make that jump, so I'll just go ahead and say it: Victor Ulloa, you are my favorite player on FC Dallas and here's why: 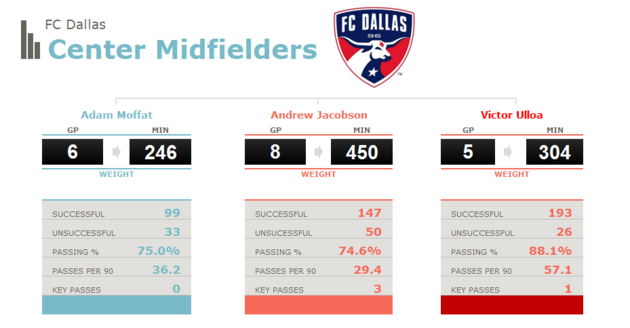 The per 90 is a bit astonishing when comparing Adam Moffat, Andrew Jacobson and Victor Ulloa, as Ulloa completes nearly as many passes as Moffat and Jacobson combined. Not all the minutes are created equal as each of them have had different scenarios (Moffat: 46 minutes playing a man down v DC, Ulloa 54 minutes playing 10 v 10 v POR, etc.) to contend with, but the most telling thing for me is that Ulloa is putting himself into better positions and passing lanes for his teammates than Moffat and Jacobson are.

I know there was a point when most of us here were really wanting to see what the Moffat and Hendry Thomas pairing could provide for Dallas in the middle of the field, but I honestly believe that Ulloa has surpassed the Scottish midfielder on the pecking order and it should be Ulloa paired with Thomas from here on out. It's just incredible how Ulloa nearly didn't make this team and has worked his way into a contender for the starting position.

What do you guys think?