The devil on your shoulder: YOLO Part II

Where in your trip to the Southern Hemisphere does a complete 180.

Share All sharing options for: The devil on your shoulder: YOLO Part II

[Editor's note: This is part two of a series, to view part one, click here.]

If you had the attention span to read about the difficulties of traveling to the Southern Hemisphere for a dude who lives by the seat of his pants, then you will enjoy this.  If not, well, I was really just crying about a lot First World problems there anyway and this is the meat of the anecdote anyway.  This is a tale of redemption and spilled beer that begins with me lurching towards a seat I am certain I never actually occupied.

I entirely missed Donovan capitalizing on a Slovenian slip and attempt to decapitate the Slovenia goalkeeper.

2-1 was the score when I finally entered as an engaged participant at my first World Cup.  The momentum had turned, The US was bringing it hard.  Finally in the 82nd minute, the US knotted it up with the Platonic Donovan-Altidore-Bradley combo for the equalizer.  What a moment!  Nepotism my ass!  We were on our way to a fixture with Algeria where a win would help us advance.  An extra 2 points would be great.

Please enjoy the shaky camera work and the beer flying in from the upper deck at the 1:10 mark.  No foul, no offside, no goal, and Coulibaly was done as a ref in the 2010 World Cup.  This halted the perfect crescendo to the Yanks' comeback, and the game ended in a 2-2 draw.  Given the state of things when I entered Ellis Park, this was a decent result, and although feeling hard done, at least we'd have a chance to advance against Algeria.  Now, I just had to find my way home.

I reverted to my train plan once I cleared the ample safety perimeter around the stadium.  I had a basic idea that it was North and West so I headed that way.  I tried to stick with the dispersing crowd, but after about 20 minutes, pedestrians started to become a little scarce.  It was at this point, that I came across a crowded filling station.  I decided to pause for a cold drink and see if anyone knew where the flippin' train station was.

The acquisition of the cold drink was an unmitigated success.  Polling the local oaks did little to inspire confidence as the myriad of opinions did little to illuminate where I might catch the train.  I spoke with a de facto cab broker to see if any cabs were available.  He knew the man for the job and motioned me to the dark side of the gas station to negotiate my fare.  Having already survived a carjacking once in my life, I smelled a pretty obvious rat, so I decided making myself scarce was a good idea.

So I went back to where the I thought the crowd would be.  I went back south towards the city center, and I came across this gem which would prove to be my lighthouse: 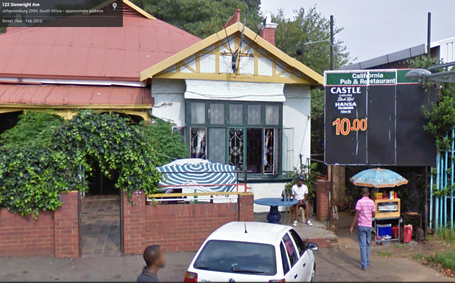 You might think this didn't look like anything special in this well-lit offseason pic, but on a dark Jo'Burg night, this oasis, which teemed with revelers Yank and Slovene alike, was a welcome respite for a lost pilgrim on name recognition alone.  I walked in and enjoyed a beer while figuring out what Plan C was going to be.

As chance would have it, I ended up sitting next to a couple of gents named Gabe and Rijs (pronounced 'Reese'- hope I spelled it right).  We shared drinks and rehashed the game, and gave our respective bios.  As it turned out, this dynamic duo had hit it off when they'd worked together stateside for a large multi-national corporation.  Rijs was a native of South Africa and had offered to show Gabe around the country during the World Cup.  They were staying in Pretoria- would you like a ride back, jackass?  So I was saved, and we might as well have won the cup tonight, because I was going to make it home.  This was merely a prelude to the icing.

If you're going to have a pair lift you out of chaos in Johannesburg, I'd recommend these brus- both are as top class as Thierry Henry firing up a Dunhill as he lobs your keeper to beat you 4-nil.  Despite Gabe's sheer class, this was the South African's night to shine as the magnanimous host.

Rijs lived in Cape Town and had driven up with Gabe to Jo'Burg for the game and to see where he had grown up.  He grew up in Johannesburg.  Prior to a successful career as an IT ace, Rijs was an accomplished musician.  Given days, I would have loved to probe him how, but the short version is that he was in the band that played at Nelson Mandela's inauguration.  His immersion in the city's modern history and linguistic proficiency is where our story takes the next twist.

Much like some...most...all South Africans, Rijs was bi, or tri, or quad lingual.  On top of English, Rijs understood Sotho.  He also had access to VIP parking in Johannesburg.  We left the California Pub and Restaurant to head for the car so we can head back to Pretoria via Sandton and began the hike up the plateau overlooking Johannesburg.  Before we finished our trip to the car, we stopped to take in the view.

Excellent view, right?  There is a part of me that regrets not getting a better shot of the priest, witnesses, and the presumed exorcisee, but I was enjoying the narration, and I needed to pee.  I also thought at the time that it might have been a bit disrespectful to jam a camera in the face of the afflicted...just sayin'.  We continued to Rijs's car to get out of town.

After this we headed to Sandton.  Enjoyed some good curry, beer, and Brazilian musicality while taking in Algeria holding England to a point.  We cruised back to Pretoria, and after some very dodgy moments, I had some beers with the locals and recounted my day.  It was the practical start to an amazing trip that I'll never forget.  To Gabe and Rijs- I never properly thanked you for the bailout.  If in the off chance you're reading this, look me up when you're in Dallas or let me know where you'll be during this year's edition of the greatest event on Earth.

I would not have missed this year's edition of the World Cup even if I had to swim.  If you're thinking about going, it's not too late.  You can always sell a kidney now that Silk Road is back up and running. So you should be able to travel comfortably as long as your incision has healed well- go for it!  USA!  Yeah!