Around MLS: Hat tricks galore, Seattle blown out, and more

Share All sharing options for: Around MLS: Hat tricks galore, Seattle blown out, and more

Week ten didn't treat FC Dallas well. After taking two losses, FCD is hoping to turn it around at home this week. Let's take a look at what else happened in MLS and what's to come.

So, there were three hat-tricks last week. Otherwise known as a hat trick of hat tricks. Hat trickception? Bradley Wright-Phillips and Harrison Shipp notched their hat-tricks IN THE SAME GAME. Javier Morales also grabbed a triple.

Let's talk about that New York vs Chicago game. Both BWP and the rookie Shipp scored hat-tricks in a 5-4 thriller which saw Chicago get their first win of the season. This was BWP's second game of the season where he has scored three goals. Harry Shipp earned his first MLS Player of the Week. This Shipp kid is the real deal. He is my Rookie of the Year so far. Could we see him in red, white, and blue at the World Cup in 2018?

Real Salt Lake remain unbeaten after dominating Houston in a 5-2 win. Javier Morales scored the opening goal in just 15 seconds. He also snagged two more goals and an assist before the day was over. Morales was nearly perfect in this one. Will RSL ever lose?

Clint Dempsey returned to his former club New England Revolution and it didn't go well. The Seattle Sounders lost 5-0 to the Revs. The Sounders defense was atrocious. And these are at the top of MLS? Seems off to me. Diego Fagundez netted a brace in the win, and New England are surging at the moment. The Revs are now 4-0-1 in their last five games and are climbing the table after a slow start to the season.

This might have been the weirdest week in MLS in a long time. Top of the table Seattle lose 5-0? Chicago and New York play a nine goal thriller? RSL and Houston score seven goals in their game? Three hat tricks in one week and two in the same game? These are some of the many reasons MLS is such a great league to watch. It is always entertaining. You never know what will happen week in and week out.

The game you should be watching (other than FCDvCUSA) is Real Salt Lake vs Colorado Rapids.

It will be very interesting to see how RSL fair without Nick Rimando, Kyle Beckerman, and Alvaro Saborio. Will they finally take their first loss of the season? Or will Javier Morales have something else in mind? 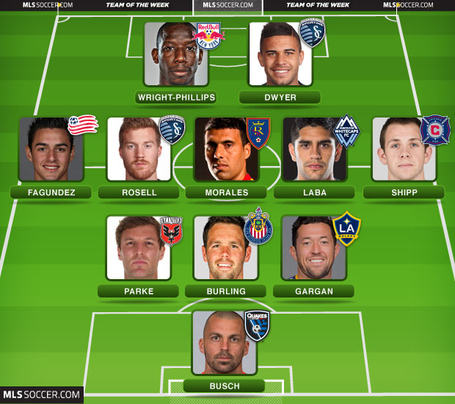 Vote Michel/Fernandez on Alonso and Dempsey!