Scratching the Chalkboard: Offense Dries Up

FC Dallas had the shots, but not the accuracy against San Jose

Share All sharing options for: Scratching the Chalkboard: Offense Dries Up

If you saw the game, then this one isn't too surprising. Dallas missed a lot of their chances last Saturday against the San Jose Earthquakes. It was wave after wave, after wave of fluid attacking stuff from Dallas after Shea Salinas' red card, but unfortunately despite out shooting San Jose 14-0 in the second half, Dallas could keep from scoring on themselves and didn't do enough to get any points on the road.

(Yes, that's 14-0 on shots in the second half and both teams managed to score one goal a piece. Really brutal and ugly when you think about it.)

Strictly looking at inside the penalty box and in the second half, this is what Dallas had to show for themselves on Saturday: 6 shots off target, and ONE shot on target. One. On the night as a whole, Dallas had a respectable 5 shots on goal, but when any team generates 7 shots inside the penalty area and only one finds its way on target there are problems.

To give Dallas some credit, four of them were headers (indicating a higher degree of difficulty), and one was off a set piece (where marking is better) and the other hit the post, but this isn't good enough. Also a positive was that Fabian Castillo shot the ball 3 times, and put 2 of them on target.

Perhaps karma is the wrong word of choice here, but as the good folks over at American Soccer Analysis have been working on for the past two years, Dallas is scoring more than what they should be based on the type of shots they are attempting. It's a pretty robust formula which even I'm still trying to fully grasp before implementing it here myself, but the premise is basically calculating how many goals a team can expect to score based on the type of shot they attempted (right foot, left foot, header), in what scenario (regular run of play, set piece penalty, corner, etc) and where the shooter is shooting from. And then taking into account what the league averages in those same scenarios.

The code for this is "xG" aka Expected Goals. Based on 5/5 (so before Seattle and San Jose) Dallas' xG was 1.12. That is Dallas should be scoring 1.12 goals per game. Their actual xG? 1.86. So what does this mean? It means Dallas has been scoring more goals than it should be based on the chances they are creating. On one hand, credit to the Hoops for finishing their chances better than the rest of the league, but on the other this might just be Dallas riding a bit of luck for the early part of the season.

As horrendous as it was to sit through that kind of performance from Dallas, there were some positives to draw from the game.

First being Tesho Akindele, who got his first start filling in on the right wing and looked very comfortable in the Hoops kit. Disappointed that he didn't take it upon himself a few times to have a crack on goal (0 shot attempts last Saturday), but his positioning and awareness was solid and even got Salinas to give the ball away dangerously in the San Jose half with his hustle. Hope to see more of him in the future.

The second positive being Victor Ulloa. I've made it known that he's fast becoming my favorite player for Dallas and he continues to validate my opinion. Just check out his stats in Zone 14: 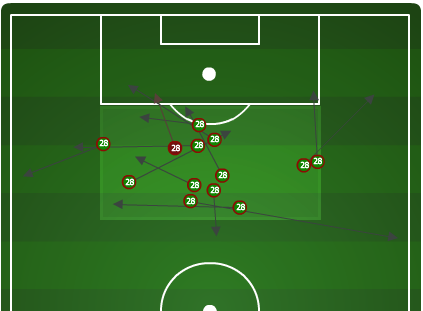 That's 12/13 in passing, with his only missed pass coming from a header. (If you don't know what Zone 14 is, this is a good explanation of it.) The most positive takeaway from this is that Ulloa moved the ball sideways effectively, only going backwards once and most importantly, completed his passes going forward as well.

So despite the loss, not everything was bad and hopefully the team can bounce back this Saturday against Chivas USA.