For Clint Dempsey, his 2013 return to MLS with Seattle was a rough transition back to America, 1 goal in 9 appearances. 2014, however, has shed new life into the native Texan as he visits his home state coming off a magisterial (hello Ray Hudson!) performance against the Portland Timbers netting a hat trick in a 4-4 shoot out. Seattle's always had a wealth of attacking options to choose from, but when you score four goals in only three matches, the eyes of Texas will be upon you (Hook 'em) and in this case, so will our Chalkboard Scouting series. 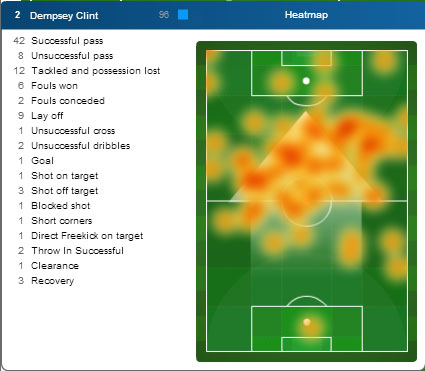 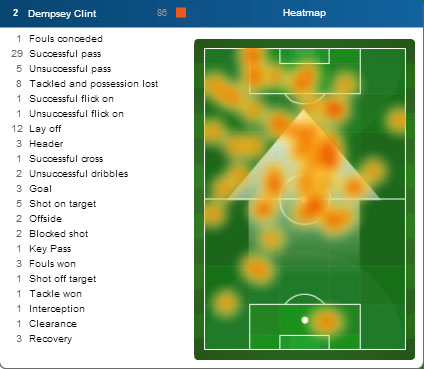 These two heat maps paints a good picture of how Dempsey likes to move around and find the pockets of space to create offense for his team. (I'm only showing two as his first game was a 33 minute appearance and there wasn't much to draw from. The first being against Toronto and the second from Portland.)

Dempsey generally starts centrally but then drifts out wide, or anywhere really where he can get the ball and have space to operate. He likes to be involved and if he feels he hasn't gotten enough touches, he'll drift closer into the midfield to find the ball and be involved as much as he can. You can even see this in the stats provided on the left of the heat maps. He wins fouls, he tackles, he intercepts, he passes, he recovers the ball.. the man just wants to be a part of the action.

Hendry Thomas along with Matt Hedges and Stephen Keel will need to communicate extremely well to contain Dempsey and his influence in the game. Hedges or Keel will most likely be tasked with sitting behind Dempsey so he cannot turn when he receives the ball, and Thomas will sit in front of Dempsey to prevent entry passes going to him easily.

Here are his passing graphs from Dempsey's first three games: 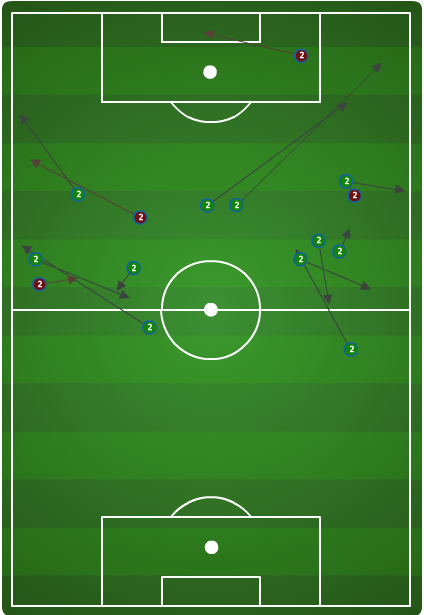 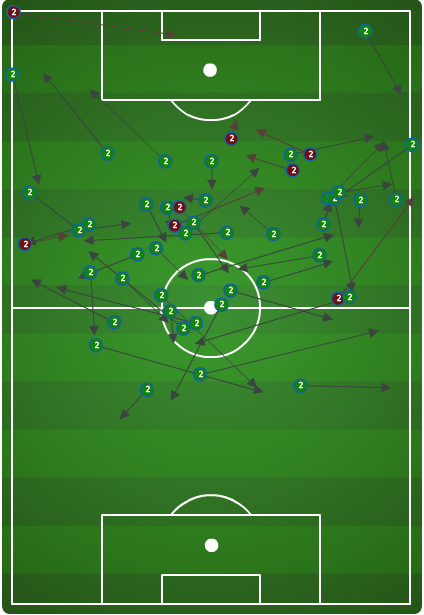 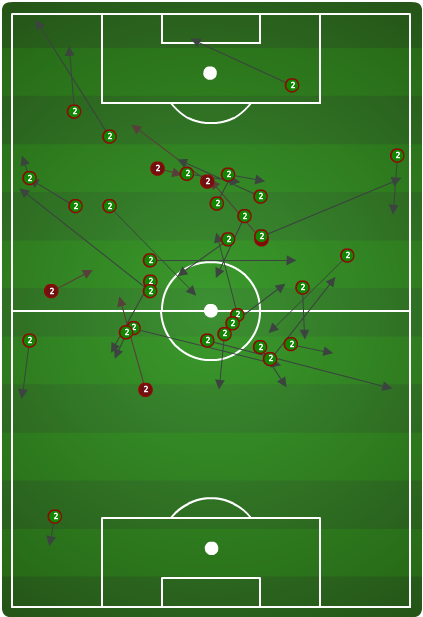 As you can see Dempsey's passes are generally very lateral. Typically, Dempsey will like to check to the ball, receive a pass, and either lay it off or move it wide to create a different attacking angle and move again. The Deuce is a great example of an attacker that simply cannot sit still as he's always moving, always getting on the ball, trying to find gaps of space to exploit.

Dallas will need to be very focused and not get caught ball watching as Dempsey prefers to move the ball quickly and off his feet as his first option. If Dallas can close those preferred passing lanes, he'll be forced to turn into the Dallas defense and I like the chances of Hedges/Keel in that situation with Thomas lurking behind to poke the ball loose.

Finally let's take a look at Dempsey's most lethal contribution to his team: scoring goals. At this point, I'm more interested in where Dempsey is shooting than anywhere else. Because of his pass and move instincts, Dempsey is very good at breaking free inside the penalty box even though he is a marked man.

Dallas has already given up 35 shots inside the penalty box and all the goals scored against (minus the Hedges own goal against Portland) came inside the 18 yard box. If Dallas cannot contain Dempsey in the midfield or the attacking half, they best keep him under wraps any time he steps into the box or he'll make them pay.