Well, that fifth week was something else. Rivalry week definitely lived up to the hype. Let's take a look at what happened and what's to come.

Dempsey earns Player of the Week

It seems Clint Dempsey has finally returned to form after his hat-trick performance against rivals Portland. It is the Seattle Sounders fifth hat-trick since joining MLS.

Dempsey helped Seattle grab a 4-4 draw on the road vs. Portland Saturday. The USMNT captain was voted the MLS Player of the Week in week five as a result.

Dempsey netted the goal that put the Sounders level at 2-2. But, Portland scored two goals to go up 4-2. But, Dempsey scored two more goals in the 85th and 87th minute to tie the game at 4-4.

Is Dempsey back to form? It seems he picked the right time to peak just before the World Cup.

I don't think there was a single person who thought this Toronto FC side (missing Jermain Defoe, Doneil Henry, Steven Caldwell, and Jonathan Osorio) would beat the surging Columbus Crew on the road. But, they did.

Yet again, Michael Bradley was simply awesome. He led Toronto to an unexpected 2-0 win. I don't know about you guys, but I'm kind of scared of how good they will be when they're at full strength and gelling.

How good is Toronto?

Week five was filled with goals. There were a total of 31 goals! Check out the best highlights from this past week.

I think it's pretty clear which game you need to be watching: FC Dallas vs. Seattle Sounders.

Normally I would go with a game different than FCD. But, this game is going to be awesome. Mauro Diaz vs. Osvaldo Alonso, Clint Dempsey vs. Hendry Thomas, Obafemi Martins vs. Matt Hedges, Blas Perez vs. Chad Marshall. This game is going to be a cracker between two of the top teams in MLS at the moment. If you haven't bought your tickets yet, get them now! 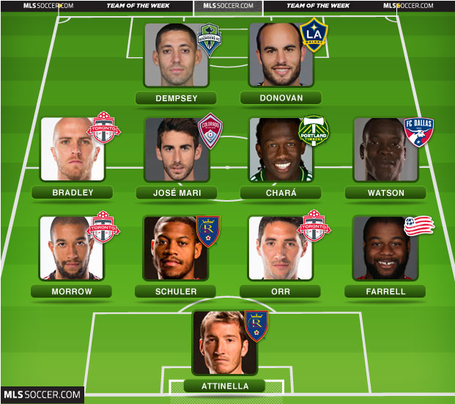 A lot of USMNTers and Toronto players. Congratulations to Je-Vaughn Watson!