Share All sharing options for: Scratching the Chalkboard: Hedges-Keel Partnership

As we have discussed here at BigD, you can never really have too many quality centerbacks. With George "Big Smooth" John still sidelined by an injury, the defensive leadership has landed squarely on the third year professional Matt Hedges - and he has shined brightly under the pressure. Hedges also seems to be the perfect partner for almost any back as he's been paired with John, Walker Zimmerman, Moises Hernandez and in recent weeks Stephen Keel while keeping the defense strong and without much of hiccup.

As I've mentioned before, defensive stats are bit counter intuitive in terms of their usage. In fact, in most cases the more defensive stats a defender registers the worst of the team is performing as this means they are spending more time ceding possession. But at the same time if a defender isn't registering any statistics then he's basically just a traffic cone out there. So a bit of a Catch-22 but I'll try to break things down with some proper context.

That's a very clean stat. Since Hedges and Keel have started together, FC Dallas has only conceded a total of four goals (one being a really awkward and unfortunate own goal from Hedges) in four games. A lot of credit has to go to Chris Seitz as well as he's made some really fine saves (Garcia penalty anyone?) that has kept the scoreline low. But this is a team effort and Hedges and Keel can also be credited for that as well.

This is probably the one stat where you won't mind seeing a higher number from your central defenders. This is pretty self explanatory, but any time you block a shot you essentially prevent a chance for the opponent to score. More blocks = less goals scored on you.

Quick breakdown of how many shots have been blocked by the Hedges-Keel tandem in relation to the number of shots the team faced:

So for some further context with these blocked shots, the four other central defender pairings (SKC - Besler/Collin, CHV - Bocanegar/Zavaleta, POR - Kah/Paparatto and HOU - Taylor/Cochran) that Dallas faced up against registered a total of only 1 blocked shot. This just shows that Hedges and Keep are putting themselves into excellent positions where they are baiting the shooter to take a shot, but are closing the angles down very well and keeping the ball away from Seitz.

Here's a quick breakdown of the number of interceptions they registered:

I was tempted to compare the interceptions against their opponents but these stats are also very context driven. For example, SKC's Collin and Besler only registered 3 interceptions but that is misleading since Kansas City had the majority of the possession. 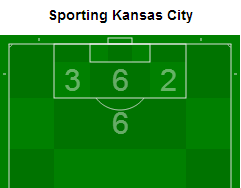 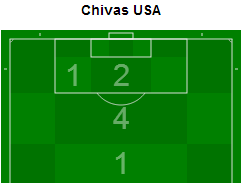 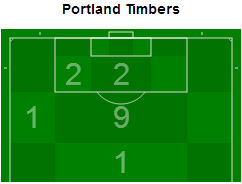 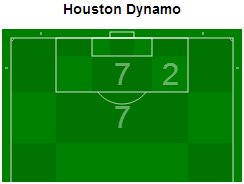 I've been avoiding graphics up until this point simply because the locations of where Hedges-Keel are doing their blocking, intercepting isn't entirely relevant. However, these are more telling of how well Dallas has been doing with their partnership.

Quick run down on how many shots inside the penalty box against the total:

Total: 27 out of 56 shots came from inside the penalty box.

So currently Hedges and Keel are able to keep most of the shots from happening inside the penalty box, giving Seitz the best possible chance to read the shot and make the save.

This Hedges-Keel tandem has been working extremely well for Dallas thus far. While I'm sure they would love to see a clean sheet soon, I'm positive that Oscar Pareja and the offense is quite happy knowing that they only need to score one to secure a point and two will get them three points. It is quite burdensome if you're not confident that scoring two or three goals will secure you any points, but as long as these two continue their play, there is plenty of reasons to be optimistic going forward, especially knowing that George John and Walker Zimmerman are almost back to full strength to further solidify and strengthen the team's depth in the position.