The Houston version of Dallas' Michel

OK. The comparison of Davis to Michel is a stretch. I was just simply pointing out they're both left footed and good at free kicks. That's it.
As we know, Brad Davis is the face of the Houston Dynamo as he pulls the strings for his team with that left foot of his. Just like Dallas relies on Mauro Diaz to run the offense, the Dynamo look to Davis to do the same, albeit from the left wing. In fact, in a player comparison, Davis is much like Chivas USA's Mauor Rosales in terms of the way the teams use those players - get the ball to their feet, allow them to cross or distribute the ball. The more touches they get, the better the chances for success and three points for their respective clubs.

Davis is a crossing specialist that allows him to ping balls into dangerous places inside the opponent's penalty box. The graphics we'll be showing here are on his cross volume and delivery location. 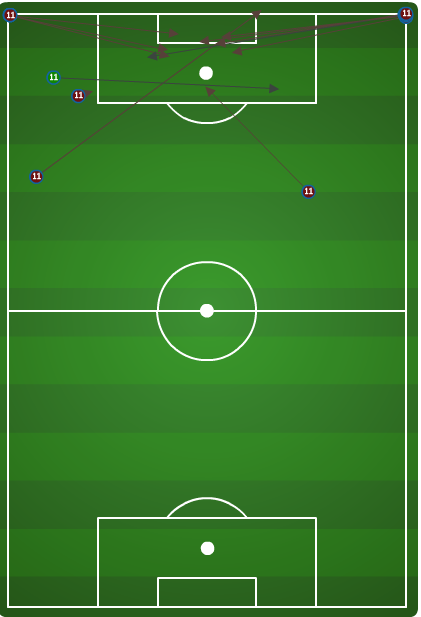 These are 12 crosses, 2 successful, 10 unsuccessful. I tend not to put too much emphasis on the amount of successful crosses because by simply putting in a quality cross in, you are forcing the defense to make a play. Either the keeper comes to claim or punch or the defender has to head it clear or behind for a corner kick. And of course, there's the chance that the defense makes a mistake with the clearance and presents an opportunity to be pounced on. Only one of these crosses was over hit and went out of bounds. The rest either found its intended target or the defense had to make a play.
Not shown here was that Davis led the team with 133 action points and this was the game where Houston smashed New England 4-0. This is relevant as I'll explain later.
Because Davis works the left flank, most of his combination play is with Houston's left back Corey Ashe. Ashe is known to be a solid overlapping full back who can get up and down the pitch with ease and send in a decent cross. In this game, Davis combined with Ashe with 9 successful passes (the most to any teammate) and Ashe reciprocated by completing 4 passes to Davis, also the most to any teammate. 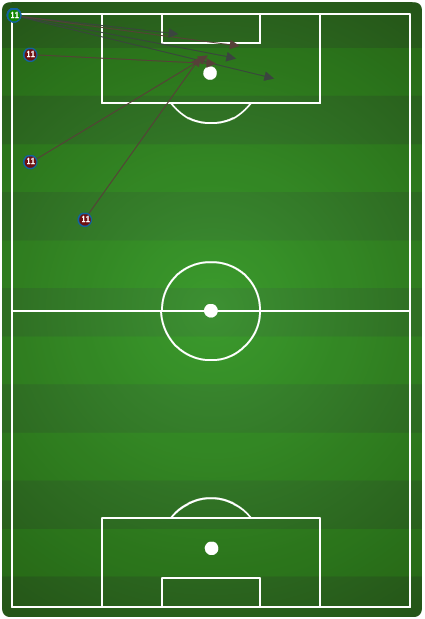 A little lower on volume, but Davis managed 7 crosses in this game (3 successful, 4 unsuccessful). He also had 114 action points, which led the team for the second game in a row. But look at where most of Davis' crosses are falling in the box - very central, just outside or in the six yard box.
Again, Davis combined well with Ashe in this game. Davis completed 10 successful passes to Ashe, which was again the most he completed to any teammate. Ashe returned 5 successful passes, but this wasn't the most as that went to Ricardo Clark with 8. 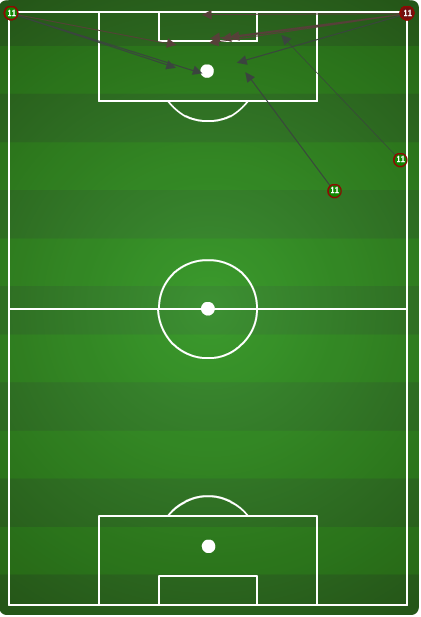 11 crosses from Davis in Houston's last match against Vancouver. 9 were off corners, so open play crosses were much more limited but he was still very successful in completing 5 successful crosses compared to 6 unsuccessful.
Interestingly, Davis only managed 100 action points, good for third on the team. If you're keeping score at home, this is also the only match that Houston has lost this season. It's still very early in the season and there isn't enough data to make conclusions on, but limiting Davis' touches will be key for Dallas.
Davis did continue to combine well with Ashe on the left flank again completing 7 passes to Ashe, which was again the most to any teammate. And Ashe to Davis was a solid 6 completed passes, which was also the most for Ashe to any teammate.

Will be very interesting to see how Dallas will handle Davis-Ashe. I suspect Thomas will be asked to shade right to close down Davis quickly and not allow him to look up and send in a cross. Another option here will be to continue to bomb Acosta forward with the intention of pinning Davis back to help cover.

I didn't think about this earlier, but the red card to Je-Vaughn Watson could be costly here. Watson has the pace on the right to keep Ashe honest, but Watson also has the defensive skills to handle Ashe as well. There is the option that Castillo gets moved to the right, but is he disciplined enough to handle the defensive responsibilities that comes with playing against Davis-Ashe?

Either way Dallas will need to lock down Davis in the same way they did to Mauro Rosales and limit his touches and crosses. If Dallas can do that, there should be no reason why El Capitan needs to go anywhere.