Misery Is Better in Company

A fan from afar tells his tell of seeing FCD in person for the first time in 2014.

Share All sharing options for: Misery Is Better in Company

Since the 2014 schedule was released, I've had April 26 circled on my calendar. Finally, after nearly a year absence, I was going to see my beloved Hoops play live. Such is the wages of living far away from Toyota Park, and in my case, all the way back in the lower Northeast in beautiful Washington DC. I was determined to savor this chance, because it might be another two years before I get a shot again. 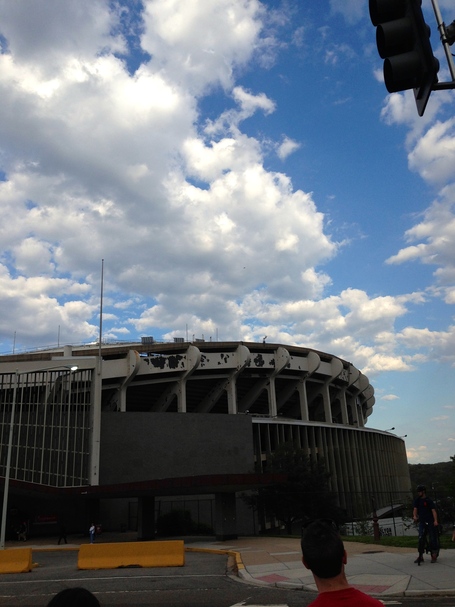 I was one of those who complained often about Toyota Park - the distance, the limited beer options, and the oven-like quality it possesses in July and August. But compared to RFK Stadium, it's downright palatial. RFK is a storied stadium in its own right. It has hosted the Redskins, the Senators, the Nationals, and plenty of international soccer games. In recent years, it's been home to D.C. United, and you can tell the relationship is in need of change.

Honestly, every time I make the short walk from the metro to RFK, it feels like I've entered a post-apocalyptic DC with an old, crumbling stadium looming overhead. Once inside, it's nowhere near as bad as first impressions, but it is apparent that it has seen better days. No doubt it would be better if DCU actually owned its own stadium, rather than merely leasing it. Still, it makes me realize, for all of its warts, Toyota Park is a great place to watch a game. 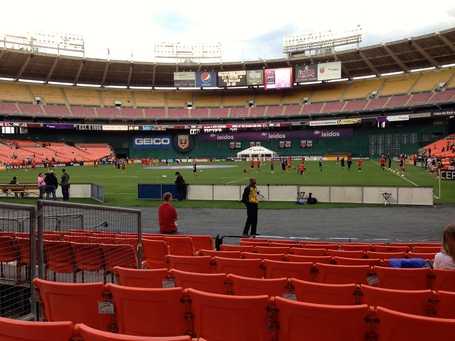 My seats, for $20, were pretty solid. Truly, there isn't a really bad seat in the house in RFK, so I was excited to see that I was about 8 rows back in Section 118, almost behind DCU's GK for the first half. Not the best angle to watch a game, but close enough to the action to catch Mauro Diaz's killer goal in the first half.

The attendance wasn't great. As the game got underway, I looked around and still had things mostly to myself. Like FCD, DCU has their own struggles with attendance. It doesn't help to be in an old stadium - but it also doesn't help coming off a tough season like last year.

That Really Got Out of Hand Fast 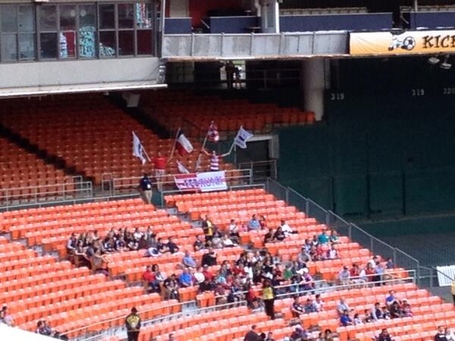 (Credits to @BrianStraus for the screen cap.)

After Diaz's opening goal, I realized I was not alone. A small but raucous band of FCD fans had found their spot and were making noise. The screen cap above catches the crew in action, and it also catches me. I'm the guy in the blue FCD away shirt near the bottom right just behind a family. Yeah, mom, I'm on TV.

For the first 40 minutes, FCD was hanging tough against a very solid DCU team. Mauro Diaz's goal, with excellent assists from Fabian Castillo and Blas Perez, was a thing of beauty. The replays don't quite capture how well Diaz owned that lone DCU defender on the play. Right in front of me, it was glorious.

It wasn't all good - we weren't really keeping possession. It felt like Pareja was aiming for the same tactics we used against Sporting KC to get a result.

But then came Loyd's dumb sport moment, and the wind shifted. I don't know what happened, but you could tell it was not the same FCD team. There wasn't much urgency or cohesion. DCU had their way with us to close out halftime with a pretty goal. I got to admit - Espindola looked great.

At halftime, I swung by to say hello to our meager away fan section and joined in with a flag and some chants.

Check out these decent, kind people: 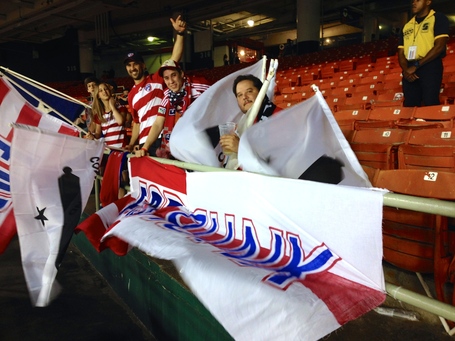 Chief among them was @FCDrunk (in the middle), a fellow DC-area transplant who led songs and chants through the night. When the rain began to fall, more FCD fans appeared out of the woodwork. We had folks from Stafford, VA, Bethesda, MD, and other points in between. Matt Hedges' family were also on hand, very appreciative to see us come out and support their son.

Buoyed by our growing numbers, our spirit was high, even though the scoreline got worse. There's not a lot to say about the rest of the game - it felt like FCD shouldn't have even touched the field in the second half. DCU owned us hard. Michel's red card simply sealed it. DCU took advantage of the opening, and without Diaz in the middle, there was little creativity working for us.

I was hopeful for 7 points out of this month, and for a handful of minutes, we were close to that goal. 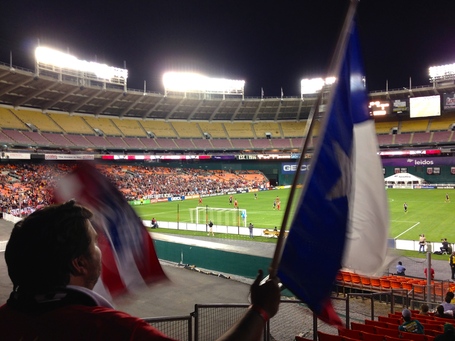 Oh when the Hoops, go marching in...