Well week eight didn't go as planned for FC Dallas. FCD saw two players receive red cards and lost on the road 4-1 to D.C. United. Let's take a look at what else happened in MLS and what's to come.

The Dynamo were routed 4-0 on the road by New York with a hat-trick from an in-form Bradley Wright-Phillips and a goal from none other than Thierry Henry. Houston have only eight points through eight games and sit in 7th place in the Eastern Conference. Isn't it great to be doing so much better than Houston?

On another note, Wright-Phillips (or BWP) had a total of four goals in two games last week. His performance earned him MLS Player of the Week, beating Clint Dempsey and Fabian Espindola. The Red Bull's attacker also became the first Englishman to bag a hat-trick in the MLS.

New York now sets their sights on FC Dallas as they come to visit on Sunday.

The Timbers dropped points yet again after tying Houston on Saturday. Portland are the only team left in the MLS without a win and sit at the bottom of the table. Portland has gone through a very rough patch so far. But, they now enter a favorable stretch in their schedule. The Timbers play their next three games at home, starting with D.C. United on Saturday.

If this stretch doesn't help them out and return them to form, I don't know what will.

Real Salt Lake remain unbeaten after tying Vancouver 2-2 last week. After scoring the first two goals of the game in the first eight minutes, RSL were confident they would be going to sleep with three more points. But, Vancouver's Nicolas Mezquida scored in the 85th minute to pull the Whitecaps within a goal. Vancouver completed the comeback through a 30-yard blast by Sebastian Fernandez in stoppage time to tie the game at 2-2.

With a record of three wins, five ties, and 0 losses, RSL is the only unbeaten team left in the MLS, sitting third place in the Western Conference behind Seattle and Dallas.

The game you should tune into (other than FCDvNY) is Sporting Kansas City vs Columbus Crew.

This is a match-up of two of the top teams in the MLS at the moment, sitting at number one and two in the Eastern Conference. Great match-ups to watch for: Federico Higuain vs Matt Besler, Graham Zusi vs Will Trapp, Dom Dwyer vs Michael Parkhurst. The atmosphere in Kansas City will be off the charts. 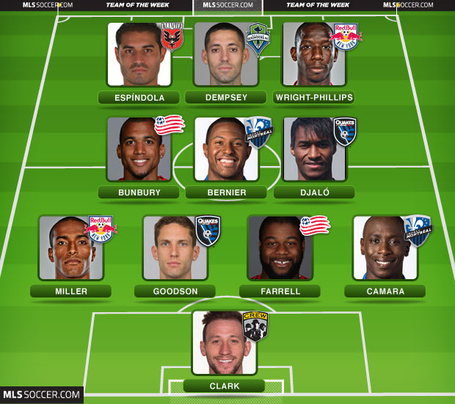 Player of the Month for April

Vote for Player of the Month for April here.