Scratching the Chalkboard: Zach Loyd's Not to Blame

Unpopular opinion, but Loyd shouldn't shoulder all the blame for 4-1 loss to DCU

Share All sharing options for: Scratching the Chalkboard: Zach Loyd's Not to Blame

If you're on the Twitter (and seriously, if you're not you really should be) your #fcdallas timeline probably blew up with a lot of venom and malice directed towards Zach Loyd for that red card he picked up at the 39th minute. It's no doubt that Dallas fell apart defensively once they went a man down, and it's common human nature to find a scapegoat for the four unanswered goals and the loss, but Loyd should not shoulder the blame on his own. His studs up challenge that led to a second yellow was indeed unfortunate, but the tactical adjustments Oscar Pareja made were just as questionable and confusing.

If you close this window because I dared to question our beloved Papi, I certainly won't blame you. After all, Papi's awesome. But if you're interested in what I saw, please continue on.

This one caught me completely off guard on so many levels. In my scouting look last week, possession was not D.C. United's strong suit and it looked to favor FC Dallas. Even before the red card that reduced the Hoops down to 10 men, DCU was winning the possession game. 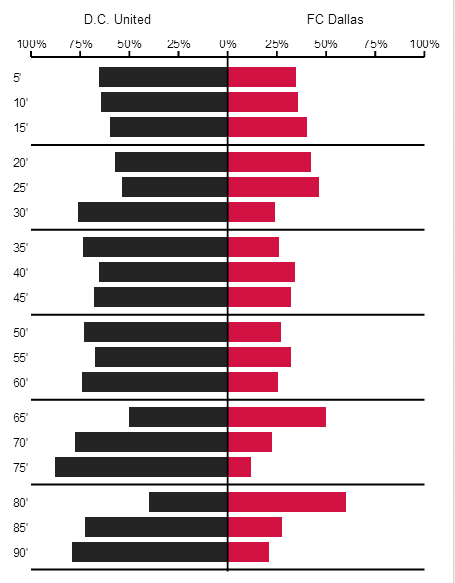 From the graphic above, there was only one 5 minute interval where Dallas actually had the majority of possession and looked like they had a chance to put another goal in.

Obviously, this stat is to be expected. There's no MLS team in 2014 that could win the possession battle playing a man down for 50 minutes like Dallas did, but I honestly believe against a DCU side, Dallas could have done a lot better and given themselves a better chance in this game to secure points.

I will start off with a caveat that I don't have access to the team's injury report so I have no idea how Blas' hamstring is holding up, but the absence of a true central forward during a good portion of the second half was really evident during last Saturday's game. Part of this showed in the possession game, where Dallas was unable to hold the ball for any significant period of time and thus never looked to really threaten United's goal.

Right from the moment Dallas went down to 10 men, Pareja did the right adjustment of having two lines of four to narrow the defense and make it difficult for DCU to attack Seitz. Generally the lines of four would rarely venture wide on defense, thus remaining a very compact shape defensively and keeping the attack wide and nullifying the threat on goal as much as possible.

The problem wasn't with the defensive posture but rather the decision to deploy Fabian Castillo as the lone striker. Castillo is not known for his hold up play and while lightning fast, his positioning and lack of defensive presence was questionable. The most telling was the screen shot below: 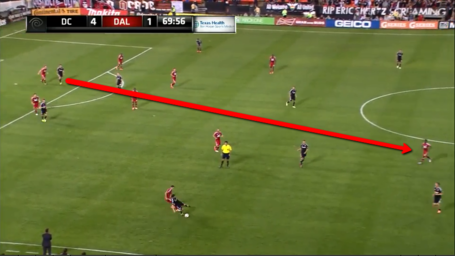 Look at the distance between the last defender (Stephen Keel) to Castillo. This was even worse just a second before as Castillo wasn't even in the frame as he just tracked back to put himself into a defensive position. When you're already down a man, having all nine outfield players playing close together compacts the field and makes it harder for the opponent to find any openings.

For whatever reason, Castillo looked to be deployed by Pareja to sit on the shoulder of DCU's centerbacks to try to hit on the counteer.  I am without the knowledge of Dallas' game plan so I'm not sure if that is exactly what Pareja instructed Castillo to do, but Castillo never positioned himself close to the midfield line and provided very little defensive pressure to harry DCU into a bad pass. It was also lost on me why Castillo would need to sit that high in the first place. Even if Castillo took up a deeper position, he still has plenty of foot speed to beat any defender in the league in a head to head foot race.

Of course, I'm willing to give Pareja the benefit of the doubt and that he actually instructed Castillo to sit deeper and help the defense. But they went 20 minutes with Castillo either following bad instructions or not following instructions at all, during which Dallas was blown up for 3 goals in the second half.

Either Pareja grew frustrated with Castillo's inability to follow instruction, or Pareja determined that his team needed a tactical change. The injection of David Texeira changed the shape of the team and thankfully stopped the bleeding. As our managing editor Drew Epperley pointed out earlier, DC United might have taken the foot off the pedal by the time Texeira entered the game, but there was definitely a noticeable change in the defensive shape and defensive intensity. 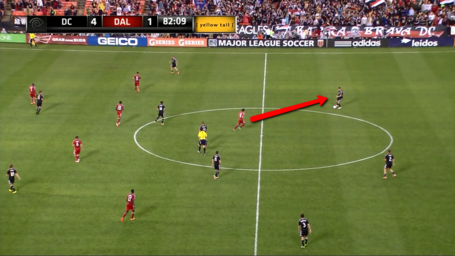 First you can see from the screenshot above that Texeira was already behind the ball and wasn't too far away from the midfield line. He was also making his run to close down the ball carrier to apply pressure, something noticeably absent when Castillo was deployed as the lone striker.

Texeira's presence and ability to apply better pressure also changed the attack, and where the ball was played on the field. Look at the graphics below comparing the passes Dallas completed with the first one showing their completed passes between minutes 39 and 74, and the second from minute 74 on to the end of the game. 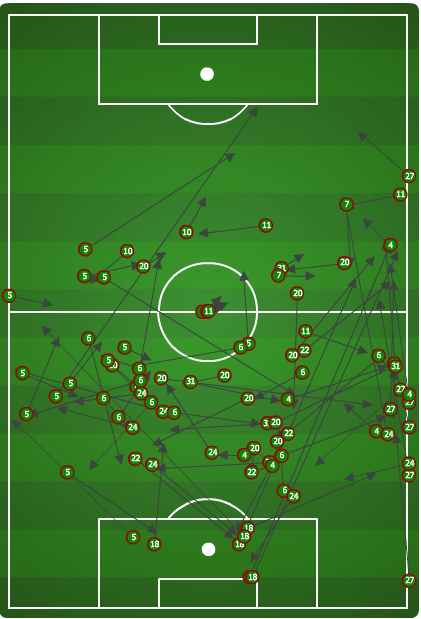 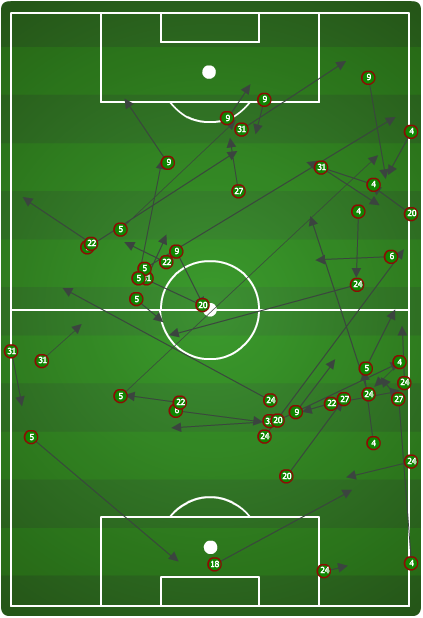 As you can seec after Texeira took the field more of  the ball was played higher up the field and out of the Dallas half. It's possible DCU took it easier, but I'd like to attribute some of it to Texeira for providing better pressure and keeping better defensive shape with his teammates.

This is not to absolve Zach Loyd of his mistake. He knew he put the team in a very difficult position as evidenced by his body language. Loyd didn't make the job any easier for Dallas, but the whole blame should not rest on Loyd alone. Castillo's deployment as the lone striker was an odd one and his lack of defensive pedigree didn't help the defensive situation either. Either way, Pareja's tactical decisions misfired this time around. One can only hope he'll get it right this Sunday against a surging New York Red Bulls.

This one is quite depressing.

After setting a club record of 16 corners in the previous game, Dallas was unable to earn a single corner last Saturday.