United give up a lot of fouls in the attacking third which could be big for Mauro Diaz and Michel.

The Hoops hit the road this weekend up against D.C. United who are on a bit of a hot streak as they're unbeaten in the last four games after starting the season with two losses. DCU also boasts a respectable home record (2-1-1) and are showing signs of incredible improvement since their disastrous 2013 campaign. It's still early in the season to really know what kind of team DC United are and if they're any kind of real threat in the league, away games are always tricky ones to navigate. For this week's scouting series we'll look into the strengths of FC Dallas and how they can capitalize against DCU.

Just like last week against Toronto, the possession game actually favors FC Dallas once again as DCU is not a team that likes or can maintain possession. In their last three games they've gained 47.3%, 42.8% and 39.2% against New England at home, New York at home and Columbus on the road. Outside of that road game against Sporting Kansas City, Dallas has won the possession battle against every team and have seen positive results from most of them.

Oscar Pareja has clearly changed the style of play for Dallas, having them more possession focused and attacking at will with both Kellyn Acosta/Zach Loyd and Jair Benitez pushing really high to join in the attack. Dallas will win the possession battle again and with Mauro Diaz pulling the strings, we can all expect the Hoops to do plenty of damage offensively.

This is another stat category that falls in favor of Dallas again. DC United are not a heavy shooting team, having only registered 62 shots in 6 games, which comes out to 10.3 shots per game. And they only put on 3.7 shots on goal as well. Compare that to Dallas who average 11.3 shots per game and 4.3 shots on goal per game. As I mentioned in my article earlier this week, Dallas hasn't done particularly well in the preventing shots department, so having a team that pulls the trigger less frequently than Dallas does is to the Hoops advantage.

Charts are not sexy (unless you're a bit of a nerd like me) but as I was looking over some stats and charts for DCU, I couldn't help but salivate over the fouls that they concede from the past three games. And if you've been following this blog about how Dallas scores their goals, I think you'll just salivate with me too.

These are the fouls DC United conceded against the New England Revolution: 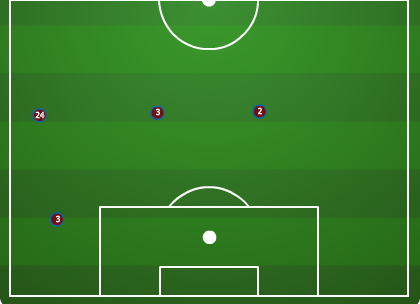 These are the fouls conceded against the New York Red Bulls: 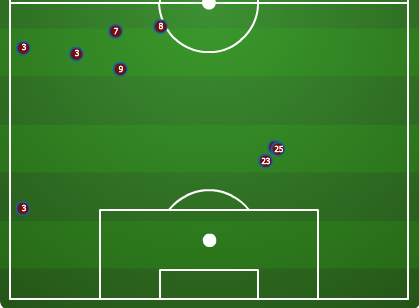 And finally, these are the fouls from last weekend's game against the Columbus Crew: 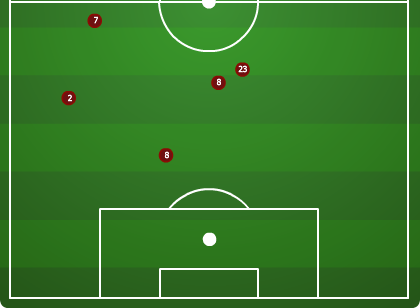 DC United are averaging 14.3 fouls per game. Granted most of these are in the attacking half but they offer enough in their own half to give Michel and Diaz plenty to work with. Practically any foul that any opponent concedes in their own half is an invitation for Michel to ping a ball into the penalty box for Matt Hedges, Stephen Keel and Blas Perez to get their heads on.

DCU will need to be very careful in their marking and not give up easy free kicks for Dallas if they are to have a chance. But with all the speed that Dallas has on the wings and the soft first touch and turning ability of Diaz, I'm betting that Dallas will earn their fair share of set piece opportunities.

While statistically I just basically laid out that Dallas should win this rather easily, the game of soccer can be cruel and unpredictable. If this were a home game, I'd have no problem betting Dallas (and Stephen Keel) does this again.

But this is a road game, and the stats don't always line up the way we think they should.