Share All sharing options for: Around MLS: Red cards, Dwyer, Rimando, and more

Week seven was productive for FC Dallas as they defeated Toronto FC 2-1. Let's look at what else happened and what's to come.

Is it just me or has there been a lot more yellow/red cards this season than in the past seasons? Players are fouling a lot more than in the past. I'm not the only one who has picked up on this trend. Check out these stats from Ben Jata's twitter account (@Ben_Jata): 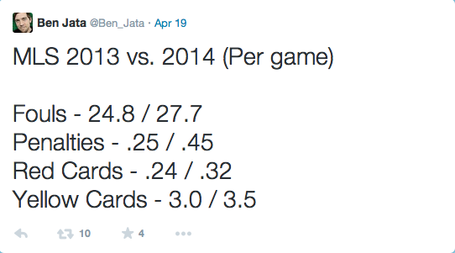 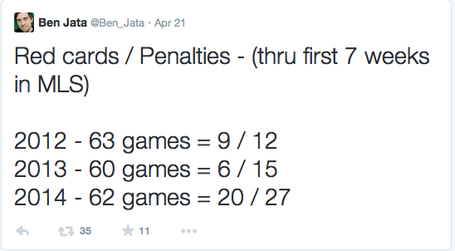 Those are some pretty shocking numbers. Check out Simon Borg's take on all the red cards from week seven here.

So, the two best performers in week seven got into a bit of an argument over Twitter. Out good friend's RSL Soapbox have you covered for this one. It's quite entertaining.

Dom Dwyer continues to impress at Sporting Kansas City. The forward tallied two goals in SKC's 4-0 win against Montreal Saturday. He now has four goals on the season and is among the league leaders in goals per 90 minutes this season. Listen to him talk about his start to the season on ExtraTime Radio here.

Real Salt Lake's Nick Rimando added yet another shutout to his career total. His heroics propelled RSL to a 1-0 win over the Portland Timbers. Because of this, Rimando was awarded MLS Player of the Week for week seven, barely beating out Dom Dwyer. He now has two POTW awards to his name this season. Clint Dempsey is the only other player with two so far this season.

The game you should be watching (other than FCDvDC) is Houston vs Portland.

Brad Davis slowly inching his way back from injury. I'd assume he would at least dress for this one. This game should be awesome. Portland is desperate for points right now. they will be throwing the kitchen sink at Houston. I'm kind of hoping Diego Valeri and company return to form against Houston. 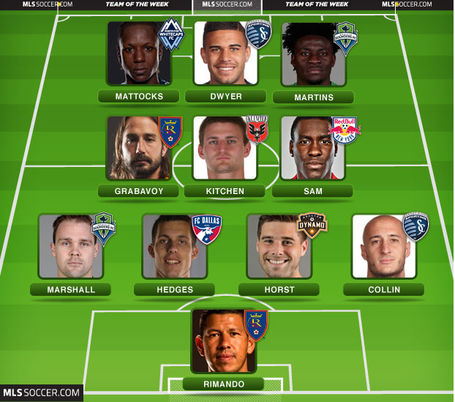