Scratching the Chalkboard: Defense Under Fire

Seven games in and still no clean sheets for the Hoops

Share All sharing options for: Scratching the Chalkboard: Defense Under Fire

FC Dallas has raced to a blistering start for the second year in a row and are comfortably in first place with 16 points (5-1-1) and are also first in goal scored (17). And while there's plenty to celebrate and to enjoy with the current fortunes of the Hoops, one problem has not gone unnoticed by our managing editor Drew Epperley (follow him @wvhooligan) or by some of you readers either: no clean sheets.

Of course we could be just nitpicking over something minor and possibly trivial -- after all, the team is sitting in first place and the offense is unstoppable at the moment. But like all things, it has to end at some point. And if Dallas is to move from "playoff contender" to "championship contender" in the next few months, Dallas will need to start locking down opposing offenses and start putting up some zeros.

Here's just a quick look at some stats from the previous year to add some context to what we're looking at:

The 10 goals against puts Dallas 6th in the Western Conference and T-12th in MLS. In other words, Dallas' defense is below average when it comes to keeping the opposition from scoring. Obviously comparing 2013 and 2014 is difficult to do with the myriad of differing factors (goalkeeper, right back, centerback, oppositions, home versus away, etc.) but Dallas did in fact have four clean sheets at the same point last season 7 games in.

It should be noted that two of the goals Dallas which has given up have been own goals, which to a degree is just bad luck and probably would've given Dallas one clean sheet at this point (Portland) but they still count nonetheless.

Giving up 10 goals in seven games isn't necessarily a worrying trend or a cause for panic, especially when the offense is producing goals, but it's more of how teams are getting their goals that Dallas needs to pay attention to and fix sooner rather than later.

Chris Seitz has already faced 100 shots in seven games, with 10 of them going by him. (For consistency of the stats I collected, I'm counting the own goals as shots against as well.) Here is what happened to the other shots:

Compare some of this with defending MLS Cup champion Sporting Kansas City who have given up just 4 goals in 6 games. They have also only given up 43 shots in those 6 games as well. That is still 1 goal per 10.75 shots, which is only slightly better than Dallas' 1 goal per shots, but you can see the tremendous difference in that SKC is able to keep GK Eric Kronberg from doing much of anything.

For a little more context, Oscar Pareja's old club, Colorado Rapids have given up just 5 goals in 6 games played but have only given up 63 shots in the process. That is 1 goal per 12.6 shots for those keeping track at home.

So Dallas isn't doing a terrible job in terms of keeping pace with the better defenses in the league in terms of goals per shots ratio (~10 shots per goal allowed), but the sheer volume of shots that the Dallas defense keeps allowing is what is troubling if this rate continues.

And while 100 shots does seem like a lot compared to the other two teams named here, Real Salt Lake has actually conceded 120 shots in their 7 games played, but have only given up 6 goals. For RSL, their rate is 1 goal per 19.5 shots against. What's the difference? Well, the post for one thing as opponents have hit the post against RSL 5 times compared to Dallas' 1. But RSL's defense is also better at harassing the attackers and getting into their shooting lanes faster as evidenced by the fact that they have blocked 33 shots thus far. More blocks will come from closing down the shooter faster, which is something Dallas will need to step up if they're going to keep conceding shots at this rate. 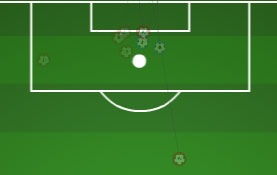 This is a graphic of where all the goals have been scored against Dallas (minus the own goals as I couldn't get the graphic to show them on the same side of the field). Outside of the Dempsey free kick, everything else has come from inside the box and if you want to take out the Issay goal shown on the left side of the penalty box, then everything has come right around the penalty marker.

Those remaining six goals just outside the six yard box have all been assisted goals where the goal scorer was on the receiving end of some kind of pass or cross. This indicates marking mistakes as the scorer was able to lose their defender and get to the end of the pass for the goal. Thankfully these are simple mistakes that can be corrected with a little more training and focus.

Not too much to worry about as long as the offense keeps finding ways to score goals. But once that well dries up, Dallas best hope that their defense has started to click and are able to secure points from 1-0 wins and 0-0 draws. At some point the offense will put up a game where nothing is working well and they best have another weapon they can rely on to get results.