Share All sharing options for: Scratching the Chalkboard: FCD Attack Against Portland

After the two utterly random red cards in the 40th minute against the Portland Timbers last Saturday, both teams had to adjust quickly to completely different 10v10 game for the rest of the match. My immediate thought was that this would favor Portland more than Dallas based on the assumption that Je-Vaughn Watson was much more valuable in open spaces and in the attack than Michael Harrington. So even though the numbers on the field were equal, I thought Dallas lost the edge here by losing a more valuable attacking option.

Instead of switching personnel and trying to keep a more balanced formation, Oscar Pareja just left the right wing open and told Kellyn Acosta to fill those gaps on the attack as he saw fit. And fit he was. Acosta could be seen gliding forward to join the attack and then sprinting back to cover the hole he left in the back line just a few seconds later, only to go marching back up the field in search for a goal. Ah, to be 18 with bundles of energy again.

And actually my initial assumption was inaccurate. Not just by the result of the game, but the statistics prove that Dallas actually grew stronger as the game wore on and were much are adept at using the space than Portland was, which was shocking given how well their movement was towards the end of 2013. Here's how things looked from the game: 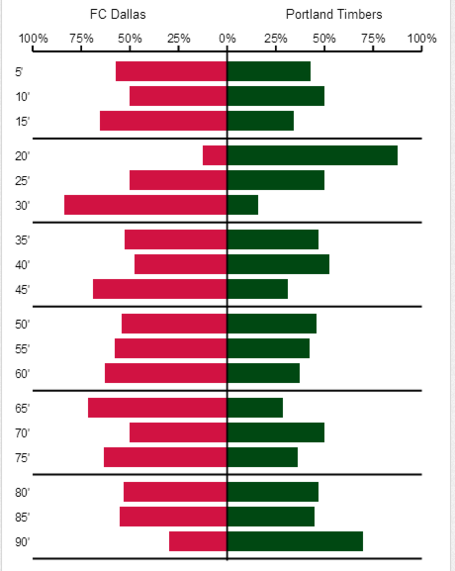 The graph above is fairly simple to read. Red being Dallas. Green being Portland. The larger the bar, the more possession the team had. The bars are then broken down into 5 minute intervals, so you can catch an idea of how the game was flowing.

As you can see, after the two red cards Dallas did not have the majority of the possession in only two 5 minute segments. The first being the first five minutes after the red cards and the final four minutes of the match when Dallas was protecting their lead.

I realize that Portland isn't playing to the heights of the 2013 campaign, but those are also good indications that Dallas are getting stronger in their play and flow of attack. According to Squawka, Portland only ceded possession in 8 of their matches during the regular season in 2013. This year, Dallas are the only team to out possess the Timbers. On top of those numbers are of course the fact that Dallas lined up a makeshift midfield. If the Hoops can continue to build on this performance, this early run to the top of the table will not be a fluke. 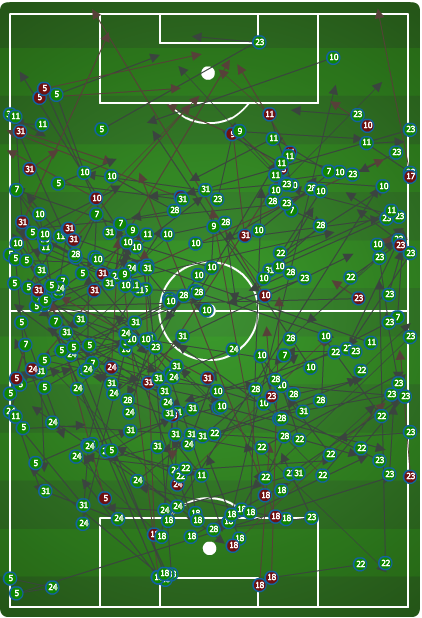 More evidence of Dallas gaining the advantage after the red cards came was in their passing game. This is pretty obvious given that Dallas owned most of the possession and you don't get to have possession unless you can pass the ball cleanly. 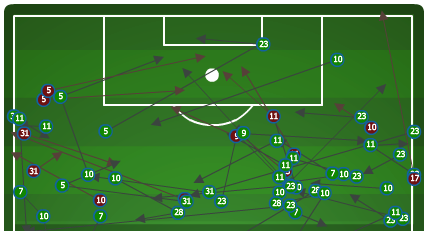 Last pieces of evidence come from Dallas' final third passing. Again, the graphic above just shows the passing after the two red cards which Dallas completed an astonishing 40/52 passes in the final third - good for 76.9%.

And naturally both goals for Dallas came after the red cards, with Dallas managing only 2 shots in the first 40 minutes and then 8 shots along with 2 goals in the final 50 minutes.

The players admitted that the game opened up much more for them after the 40th minute and thankfully it was the Hoops who took full advantage of the open space and really out played Portland at their own game for the three points.

Dallas is really showing their teeth under Pareja, being able to out possess other teams when their game plan calls for it and also being able to play disciplined and maintain shape when the plan calls to absorb (SKC). Hat tip to Pareja for adjusting and developing solid game plans last Saturday and to Dan Hant and Fernando Clavijo for landing their man.