David Texeira has been a bit difficult to analyze thus far this season. He's given the FC Dallas faithful small glimpses of what he brings as a striker in his few appearances, then went largely unnoticed in his first start against Houston the previous weekend (only 27 action points in 65 minutes - for comparison Blas Perez logged 64 action points in 67 minutes against Portland on 3/29).

But after a second consecutive start, a full 90 and a goal to boot, we now have a better idea of what kind of player Texeira is and why Oscar Pareja has been calling his name off the bench so often. So for today's Chalkboard series we'll look briefly at his first 90 minute game and also dive into his whole body of work thus far this season. 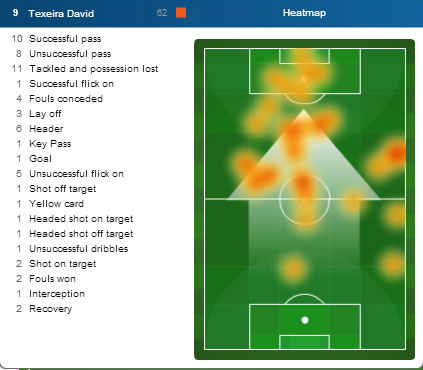 His action points are a little on the low end - 62 for 90 minutes is fairly sub par - but compared to his Houston performance, you can see he's improving in finding ways to get involved in the game. Even though Dallas plays with the lone striker formation, which has the tendency to isolate the central forward, Texeira has to do better to help influence the game in the same manner that Blas does. Upside here is that Texeira is far from a finished product at the tender age of 23. And so while David still needs to grow his game, he's showing signs of improving with each game and is giving the Dallas faithful hope in that they've found a suitable long term replacement for Perez.

What has impressed me the most with Texeira is that he's very disciplined with his overall positioning on the field. This is only the heat map from the Seattle game, but his others are quite similar in that most of his involvement remains very central and he does not abandon that space. This is particularly important as Dallas thrives on wing play from Fabian Castillo and Je-Vaughn Watson, they can only do their work if Texeira occupies the opponents' center backs and allows space behind the defensive line.

10 of the 15 goals Dallas has scored this season (including one own goal off a corner) have come from a set piece of some kind (corner, penalty or free kick). We covered a little bit of the debate whether Dallas is too reliant on set pieces for their goals here at BigD with a slight majority of you thinking it's a non issue. From my view point, goals are goals and it still requires a lot of skill to produce the goal from the free kick taker to registering a shot on target. It's not a secret that Dallas is a threat during a dead ball situation, so opponents (if coached properly) have a heightened sense of alertness anytime Michel or Diaz step over the ball.

While Diaz gets fouled more, Texeira's are more valuable in terms of foul placement. Because Diaz plays in the midfield, when he gets fouled Dallas is further back as opposed to Texeira where almost any time he's fouled, Dallas has a great opportunity to put a ball in the box. Which leads us to our next topic...

There are no stats on this, no Chalkboard that accounts for these. In fact I'm pretty sure I just made this whole thing up, but there has been enough of pattern to draw some conclusion here that Texeira has an ability to help generate and create goal scoring opportunities for his teammates. The most obvious of this is simply from the fouls he draws. Just take a look at these three fouls:

Drew foul in 70th minute to set up the Diaz free kick to Hendry Thomas to Fabian Castilo's opening goal.

Drew foul in the 41st minute to set up Michel's penalty.

And while not a foul, it was Texeira who chested down Kellyn Acosta's pass in the 84th minute against Portland on 3/29 that bounced to Diaz for the game winner.

In 211 minutes, Texeira has been directly and indirectly involved in five of the team's 15 goals this season. For those keeping score at home, that's 33% of Dallas' goals and he is generating 2.13 goals either directly or indirectly per 90 minutes through his involvement somehow. There is still plenty of improvement to be made from Texeira, but all signs are pointing to the positive that Fernando Clavijo has found a special player for years to come.