Around MLS: Kaka Linked With MLS Again, Columbus On Fire, And More

Share All sharing options for: Around MLS: Kaka Linked With MLS Again, Columbus On Fire, And More

The fourth week of the 2014 season was full of excitement. Let's take a look at what happened and what's to come.

The brazilian has been long linked with Orlando City, who start MLS play in 2015. MLSSoccer.com has everything you need to know on the situation.

And according to the Orlando Sentinel, Orlando City's new 84-million-dollar stadium is approved and will be ready to go in 2016.

In my opinion, Kaka will only make the move if AC Milan don't qualify for UEFA Champions League and if he goes out on a good note in the World Cup this summer with Brazil.

Will Kaka make the move?

The Columbus Crew are undefeated with a record of 3-0-0, outscoring opponents 7-2. This is the first team in club's 19-year history that they have won their first three games of the season.

With wins over Seattle, Philadelphia, and D.C. United, this club is on fire. This is due in large part to their passing game. So far, Columbus has three players in the top eight of average passes per game. Will Trapp, Federico Higuain, and Tony Tchani are all on the list (see Ben Jata's tweet below).

This Crew side has looked sharp through the first four weeks of the season. But, they face a tough test at home Saturday against Jermain Defoe and Toronto FC.

Are Columbus contenders or pretenders?

The fourth week was filled with late goals.

The game you should be watching this weekend (other than the Texas Derby of course) is Sporting Kansas City vs Real Salt Lake.

This rematch of the 2013 MLS Cup game has great matchups. Graham Zusi vs Kyle Beckerman, Javier Morales vs Benny Feilhaber, Dom Dwyer vs Nick Rimando, Alvaro Saborio vs Matt Besler. What more could you want? 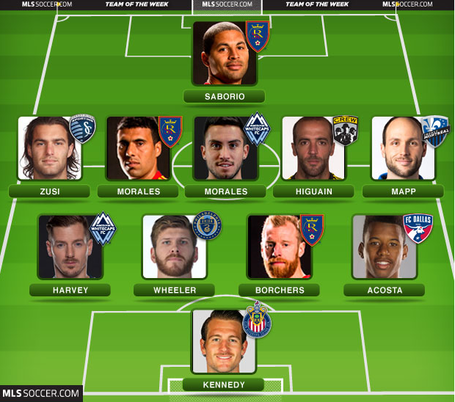 Graham Zusi was named Player of the Week.

Vote Mauro Diaz for Player of the Month here.