So this is what happens when you use your players correctly

Share All sharing options for: Scratching the Chalkboard: Je-Vaughn Watson

Je-Vaughn Watson had a rough 2013 with FC Dallas. Out of position, out played, and constantly the ire of fans. His play was erratic, lethargic and often times many would wonder how he was a prominent fixture with the Jamaican National Team. Little did we know at the time that Watson was being played out of position by Schellas Hyndman in the center of the field. Yet even when played out on the wings, Watson still didn't look up to par to be on the field.

But all this seems to have changed in just three games under Oscar Pareja, who seems to have an understanding how not only how to get Watson flying down the right flank on the offense, but has even gotten Watson to buy into being a serviceable right back. Watson has gone the distance for all three games of the year, sliding into right back for the first two matches against Montreal and Kansas City. Against Chivas USA last Saturday, Watson was a menace for Tony Lochhead for the whole evening. Here's a recap of his performance: 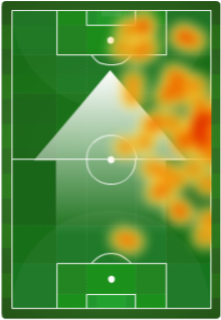 As you can see, Watson manned his right flank pretty tightly and didn't venture beyond the midway line. He also got most of his touches in Chivas' half, large in part to Dallas' 58.2% possession from the evening. Also encouraging are to see him get touches inside the box, indicating that he's getting open and putting himself in dangerous positions to score. 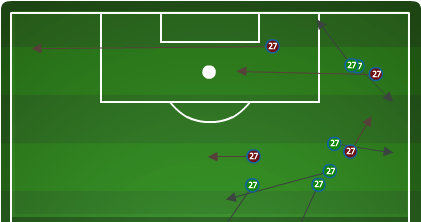 Speaking of getting into dangerous positions, the graphic above shows Watson's passing in the final third of the field. The one pass that probably sticks out the most is that pass/cross that Watson laid off at the six yard box to an empty field. It was frustrating to see a pass like that go entirely through the Chivas defense without having someone on the back post, but those are the kind of balls you want your wingers to play. Even though no one was there to be on the receiving end, more passes like that throughout the season will lead to goals.

Watson's passing stats here was 6/10 which isn't incredible but not terrible either. The encouraging parts are that he's in good positions and making smarter decisions with the ball. I can't recall how many times we saw Watson last year get near the penalty box and then just loft in a hopeful cross into the stands.

The graphic above are all the action points that Watson had inside the penalty box. Thought this was relevant as I indicated earlier that he was getting into good positions and for a winger to have this kind of action so close to goal is a great sign.

We already covered that unsuccessful pass at the top of the six yard box in the 17th minute, but the other three are shots he took, with one being a goal off a delicious pass from Mauro Diaz which coincidentally also ended up being the match winner. Watson went 1/3 in shooting, missing the target entirely twice but thankfully his one shot he did get on frame found the back of the net. 1/3 isn't clinical by any means, but again, Watson is putting himself into good positions and creating chances. In time, chances will lead to more goals. It'll be more worrisome if he wasn't creating any chances to score.

As Jay Neal mentioned in his game grades article, there's no reason to hate on Watson anymore after this match. Oscar Pareja has shown that he knows how to get the most out his players and Watson is clearly benefiting from it. Plus, could you really hate a guy who has hip movement like that as he rounded Dan Kennedy for the goal? Hips don't lie.