The third week of the 2014 MLS season has come and gone. Let's take a look at what happened and what's to come.

In efforts to bring an MLS franchise back to Miami, David Beckham wishes to build his new 25,000-seat stadium in PortMiami, according to the Miami Herald. Not going to lie, it looks pretty sweat.

Beckham unveiled his designs Monday. The stadium would feature an open-air design showcasing the city's skyline in the background.

However, not everyone is in favor of PortMiami being the location that would bring a plaza with restaurants, shops, and a nightclub. Royal Caribbean Cruises is headquartered next to the site and have been warning elected officials that a soccer stadium would cause traffic concerns at the port that accommodates four-million-passengers a year.

The superstar does have backup plans. But it seems like the PortMiami location is his clear favorite.

Beckham's ownership group was awarded an expansion franchise this year and plan to begin play with the yet-to-be-named Miami team in 2017.

What do you think of the designs? Will his wish be granted?

This is what I like to see. Our club on top. For now, at least.

FC Dallas seems to be the talk of the town after a 3-1 win over Chivas USA at home Saturday. It seems like most of the talk has been of Matt Hedges, after Oscar Pareja's and Stephen Keel's comments of Hedges potential at the USMNT center back position.

Do you think FCD will stay on top?

Columbus Crew's Bernardo Anor has been named Player of the Week by MLS after netting a brace against Philadelphia.

He won overwhelmingly, getting 13 of the total 17 votes. I wouldn't be surprised if he didn't win Goal of the Week as well for his 35-yard blast.

Columbus Crew have been playing well. Two games, two wins, and six points. They're getting the job done so far. Now they face a tough task on the road against Seattle.

Is Columbus surprising you? Can Anor and company keep it up?

The game you need to be watching (other than FCDvPOR of course) in week four is Real Salt Lake vs Toronto FC.

Real Salt Lake have beaten and tied Los Angeles, while also tying San Jose. They look like they're going to have another good year. Toronto is 2-0-0 and Jermain Defoe keeps scoring goals. This is definitely one to watch for. Defoe vs Nick Rimando. Michael Bradley vs Javier Morales. Great matchups.

MLS Team of the Week 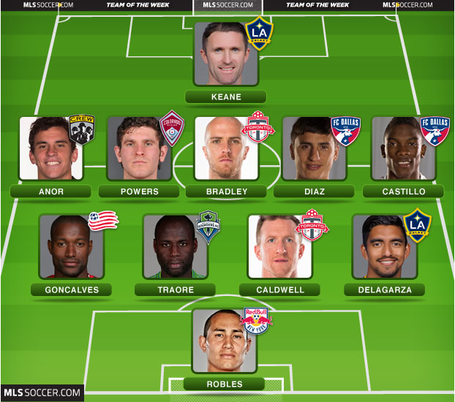