MLS crashes out of the CCL and more.

Time to get ready for Thursday with some morning links.

Moffat on his debut with FCD | FCDallas.com

We'll have a closer look at his game later today but here is a nice interview with the Scot.

Texeira a plus for FCD | Soccerly.com

Moffat wasn't the only one making his debut last weekend in KC. David Texeira helped set up the free kick that led to the game-tying goal.

Cruz Azul left no doubt last night as to who the better side was. 5-1. Ouch.

Out of the three teams, I gave the Quakes the least amount of chance to advance and they nearly proved me wrong. Damn.

Apparently the Mexican side was filming a Quakes practice.

Donovan ponders what MLS teams need to do next in the CCL | MLSSoccer.com

It isn't just money and scheduling. It is being patient for the academy and USL PRO stuff to really settle in over the next couple of years. Once each team has more seasoned players from 1-30 on their roster, it will help.

Refs could end their labor issue this week | SBNation.com

Could we finally see an end to this labor issue with the league's officials? Let's hope so.

His little ball tag against a Toronto player will cost him a couple games. Don't worry he'll be back in time for his visit to Texas.

I have to say I was bummed when I heard this news. I really wanted him to play one year in MLS before hanging up his boots.

I know the FCD digital team was playing around with these bubbles yesterday at work. Boy this looks like fun.

And finally our stadium tour takes us to Mexico with a new stadium that is going to wrap up construction this year, the Estadio de Futbol Monterrey. 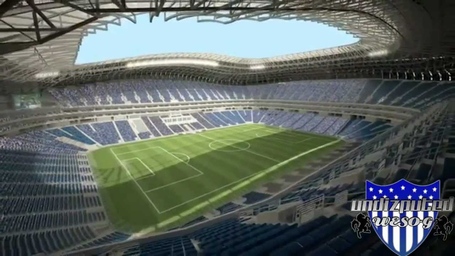 What did you make of the latest two MLS losses in the CCL? What can be done to improve MLS teams for the CCL? Let's discuss that and more below.