Time to begin focusing on Chivas USA around these parts.

Boy, MLS sides really know how to stink it up in Mexico. If the LA Galaxy doesn't have a CCL hangover, I'm sure their fans do this morning. More on that in a moment though as we hit our midway point on the week.

Time for some morning links to get the day started off.

You have to love seeing that this guy will practice these set pieces on his own, after training.

FCD starting to get healthy | Soccerly.com

Good news on the injury front for FCD. Looks like we may at least have Zach Loyd and Raul Fernandez on the bench this weekend.

Kudos to Matt Barbour for breaking this one yesterday afternoon. Also, good move for Hassli. I know he was hoping to remain in Texas if he could, this certainly gives him that chance.

The Mexican side had a huge first half, particularly a huge first 10 minutes last night. A 4-1 drubbing of the club that I felt had the best chance of advancing in this edition of the CCL.

SKC say they won't park the bus in Mexico | MLSSoccer.com

LA had a similar quote going into their match, look what happened to them last night.

Add Villa to the growing list of names that could be in MLS one day.

A nice article from Matt Doyle as to why we should be excited by Green accepting to go with the USMNT.

US to play Czechs in September | Stars and Stripes United

Already getting the fall friendlies scheduled. Seems early for that.

Yeah, the photos from this scene yesterday were insane. Cars literally turning around on a major freeway and driving the other way.

And finally our stadium tour today takes us to Belgium with the Constant Vanden Stock Stadium. 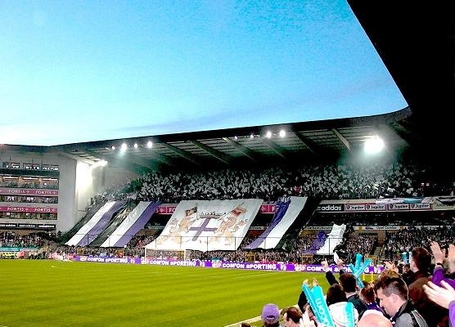 What did you make of the Galaxy going down so badly in last night's CCL game? Are you excited about Green joining the USMNT? Feel free to discuss that and more below.