SKC commentator said Perez wasn't involved in the game, but was he?

Matt Hedges received all of the plaudits for his performance on Saturday against Sporting Kansas City here at BigD, and rightfully so. His defensive stats was almost flawless (almost, as Aurelien Collin beat Hedges for the game's first goal) and his 90th minute equalizer was breathtaking. And as impressive as Hedges was, there was a more interesting story developing on the chalkboards. So today's focus will be on none other than our Panamanian striker Blas Perez.

Blas had a quiet game offensively, managing only three shots in the match - although one came inches away from finding the back of the net at the end of the first half that got me out of my seat. Despite what SKC Color Commentator and former MLS player, Diego Gutierrez said, Blas Perez was far more involved in the game than meets the eye. It was actually Gutierrez' lazy comment that made me look a little closer at Perez' stats for the evening.

First thing we see below are simply the action points for each player. This is pretty simple to read and understand: the higher the number, the more times a player did something and was involved in the game. Blas led FC Dallas with 75 action points, which automatically debunks whatever observation Gutierrez made regarding Perez not being involved. 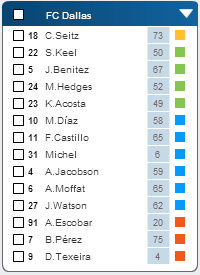 (Side note - Gutierrez could have meant Blas wasn't involved offensively, and that would have been a better argument but as we all know and as I'll show below, there's more to a striker than just scoring.)

If you watched the first half where Dallas was absorbing the offensive pressure from Kansas City, you might have noticed that you heard Blas' name being called up a lot on the defensive side of the ball. As you can see below, Blas had four clearances off SKC's corners, snuffing out any dangerous crosses that might have found an attacker. This type of defensive work isn't what you pay a striker for, but it's definitely a bonus attribute that any coach would love to have in their star forward.

This type of defensive work and commitment to the team is more than just Oscar Pareja's instructions for him on set pieces. Perez is more than willing to do his share of chasing, covering and grunt work required to help his team. The two graphics below are probably the best examples of this from Saturday night.

First you can see Perez making 3 recoveries in the game. His first one at the center circle at the five minute mark isn't all that surprising given his position, but his other two are incredibly deep and oddly really far left for someone who's primary position is central striker. 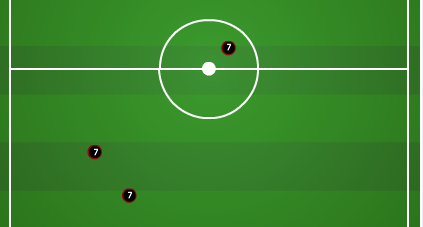 If I ever learn how to make gifs, I will start putting them in here, but this screen shot is a clear indicator of what kind team player Blas is. Seconds before this, Castillo was called for a foul on Collin up near the penalty box and was caught behind the KC defensive line and out of position. Seeing this, Blas instinctively covers for Castillo while he makes his way back. Seconds after this screen shot, Perez recovers the ball and starts a counter attack which led to an Adam Moffat shot which resulted in one of two corners that Dallas would earn that night. 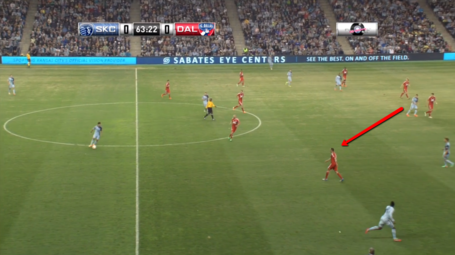 Blas doing what good playeres do: covering for his teammate.

When your team travels to a difficult stadium to play in, against a team that's heavily favored to out possess you - to survive such a game, you need a total buy in from all 11 players on the field to commit to being discipline, being patient and maintaining your defensive shape. This is difficult to get total buy in from attackers as they're not used to this kind of assignment, but Perez is more than willing to do his part and take one for the team. His commitment to being a team player is evidenced by the fact that in 42 starts for FC Dallas, Blas has been subbed off only three times and I'm fairly sure one was because of injury. Perez had a quiet night offensively, but to say he wasn't involved is naive and you are missing the fuller picture.