Share All sharing options for: Around MLS: Jermain Defoe Flying High After Debut

The first two weeks of the 2014 MLS season have been nothing short of utter awesomeness. Let's take a look at what happened and what to look for this week.

Defoe is flying high after he netted a brace on his MLS and Toronto FC debut. Shocker? Definitely not. I think we all knew this guy would be a candidate for the Golden Boot. I don't think anyone thought it would be this easy for him to adapt so quickly.

Defoe's debut overshadowed U.S. midfielder Michael Bradley and Brazilian goalkeeper Julio Cesar. All three had their debuts, but Defoe had the most influence in their 2-1 win in Seattle.

His first goal came in the 17th minute when Jonathan Osorio delivered a perfect pass to Defoe who slotted it home past Stefan Frei.

Defoe's second goal came in the 25th minute after a bad back pass from Marco Pappa (who hasn't been playing well...at all...am I right?).

Toronto FC will look to continue their success at home against D.C. United.

And oh yeah, that guy Clint Dempsey. Remember him? He finally scored a goal in the 68th minute. Maybe he will return to form just in time for the World Cup?

What did you think of Defoe's/Dempsey's performance?

Started from the bottom, now they're here? Are these guys for real? Chivas USA are undefeated after beating the Chicago Fire and tying Vancouver. They are the surprise of 2014 for me so far.

The deadly combination of Mauro Rosales and Erick Torres has been lethal. If they keep playing this way, they might just make the playoffs.

Answer me this: Are they for real?

The mighty Timbers. Two points in two home games? Doesn't sound like them.

Portland has relied on a Gaston Fernandez late equalizer in both games. They don't look like the 2014 MLS Cup Champions everyone thought they would be in preseason.

On the bright side, Fernandez has looked lively and has come in clutch both games. Great signing by the Timbers in the offseason.

Will they turn it around on the road against Colorado this week?

Sporting Kansas City, Los Angeles Galaxy, and San Jose head into their second legs of the CCL quarterfinals this week.

The Galaxy will look to capitalize on their 1-0 win against Tijuana, as they go on the road to Estadio Caliente in the second leg. LA plays Tuesday at 9:00 pm and the match can be seen on Fox Sports 2 or Univision.

San Jose faces a tall task after tying Toluca 1-1. That away goal could prove to be the end of them in the tournament. The earthquakes play Wednesday at 7:00 pm and the match can be seen on Fox Sports 2 or Univision.

Finally, Sporting Kansas City look to be in good shape after outplaying Cruz Azul to a 1-0 win. They were unfortunate not to score another the way they were playing. SKC play Wednesday at 9:00 pm and the match can be seen on Fox Sports 2 or Univision.

Who will move on to the semis?

MLS Team of the Week 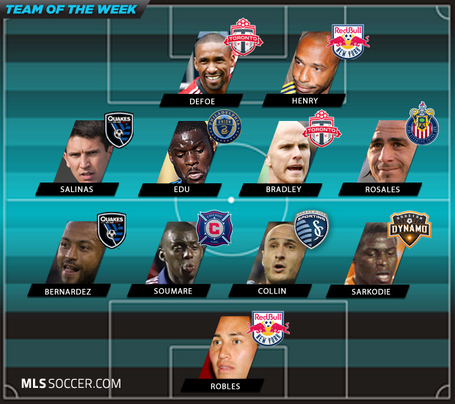 Really? No Hedges? Not even on the bench? Wow.