Bust out your green, it is St. Patrick's Day!

I'll spare you some Irish jokes this morning as we kick off the third week of the 2014 season. I'm not Irish, so I don't go all out for this day like some of you might (though I do have a sixer of Guinness in the fridge for later).

But before we go and drink a ton of green beer today, let's get the day started off with some morning links.

A nice recap of all the social media tweets, posts and what not from Saturday's game.

Late game get away not who SKC is | MLSSoccer.com

The second game in a row this season that SKC has let one in late, this time it was thanks to Matt Hedges and Michel.

Pareja happy with the character of the team following the draw | MLSSoccer.com

Are some of the old habits finally being flushed out?

Definitely some good take aways from this one.

I like this idea, but I just don't know how to do it.

ICYMI: One stop shop for all Week 2 fun | MLSSoccer.com

Wow, this is one heck of a weekend recap here.

I'm really liking some of these new features on MLS's website this season.

I missed these last week but it looks like Grant Wahl is back for 2014 with these rankings of his. Instead of complaining about the team being in Frisco like he has for the last few years, this time his complaint is about the team not releasing the season ticket numbers to him. Dude, get over it.

This guy just has fun doesn't he?

And finally our stadium tour today takes us to Ireland (of course) with the Aviva Stadium. 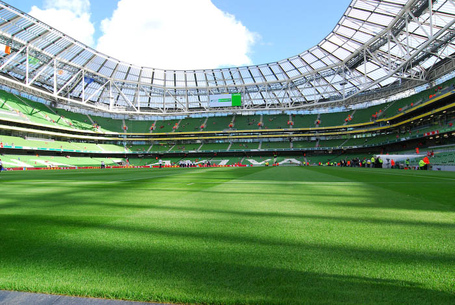 How did you feel about the draw this weekend? Excited to have a couple of home games to round out the month? What do you make of Grant Wahl's latest rankings? Lets discuss that and more below.