The weekend is almost here but so far this week has been pretty kind to MLS fans as both LA and Sporting KC won their matches in the CONCACAF Champions League last night against Mexican foes. Good for them.

As FC Dallas continues to prep for this weekend's game in KC, here are some links to get you started on this Thursday morning.

The Jamaican was busy over the last few weeks.

Behind the scenes with David Texeira | FCDallas.com

The newest DP on the team had some photos done yesterday. I'm really eager to see what he brings to the table though.

Pareja could have decision to make at DM | Soccerly

Both Hendry Thomas and Adam Moffat trained yesterday, which is great news.

Samuel gets off the mark | MLSSoccer.com

I still wonder if the Galaxy set themselves up enough for a win in the return leg in Mexico.

A fairly lucky goal if you ask me but it stands and SKC now goes to Mexico with a small advantage.

Getting to know SKC's newest player | The Daily Wiz

I doubt FCD fans will see Antonio Dovale this weekend but he looks to be a good addition for them.

Soccer in Utah, from the early 1900s | RSL Soapbox

A pretty cool look back at when the game began to get big in Utah.

Normally I ignore anything she does but Herbie the Lovebug doesn't seem like the right nickname for her anymore.

And finally our stadium tour takes us to Greece with the Karaiskakis Stadium. 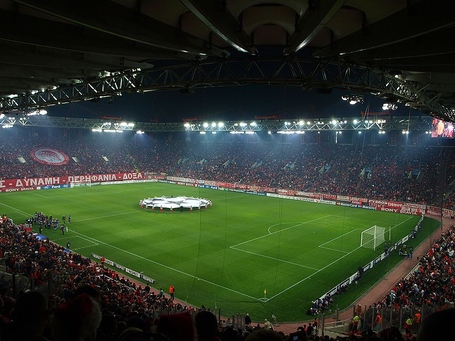 What do you make of the MLS club's chances in the CCL? Think all three (SJ, LA and SKC) can advance past their Mexican opposition? Do you think SKC has enough in the tank for this weekend? Feel free to discuss that and more.