Mauro Diaz and Fabian Castillo took the headlines from last Saturday's game and rightfully so, but the other story that garnered some attention around here was Dallas' backline started two Homegrown Players; Kellyn Acosta and Moises Hernandez. And while Acosta is a well known player around these parts, Hernandez was more of an unknown quantity who not only made his first MLS start but also logged his first MLS minutes.

So how did our very own do against Montreal? Let's look at the Chalkboard. 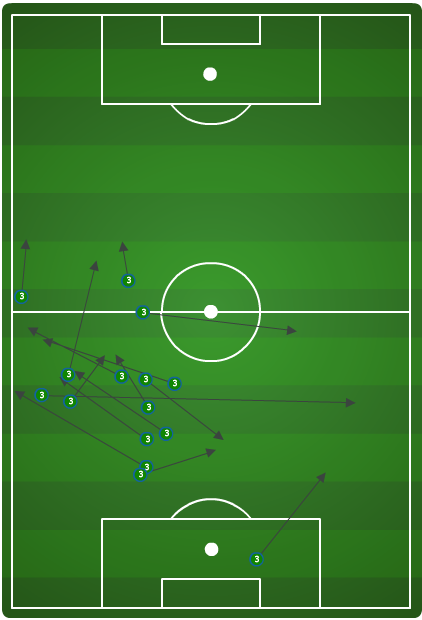 Truthfully, evaluating defenders using the Chalkboard is quite difficult because many of their primary assignments involve positioning and covering spaces that don't show up on any stat chart. It's even more difficult considering Hernandez played out of his favored fullback position, but there is enough for us to get some idea of what kind of player Dallas has on their hands.

First you can tell from the chart above that Pareja didn't ask Hernandez to be on the ball very much and in fact, according to Opta, Hernandez had any kind of interaction with the ball 46 times (fewest among the Dallas starters). From the successful passes you see above, Hernandez purpose on offense was to act as a safety net and cycle the ball back to the other players when necessary, evidenced by the fact that he completed only 15 passes compared to 7 incomplete.

A 68% successful pass rate is pretty abysmal at this level, but the chart below shows that his passing stats weren't as bad given the right context. 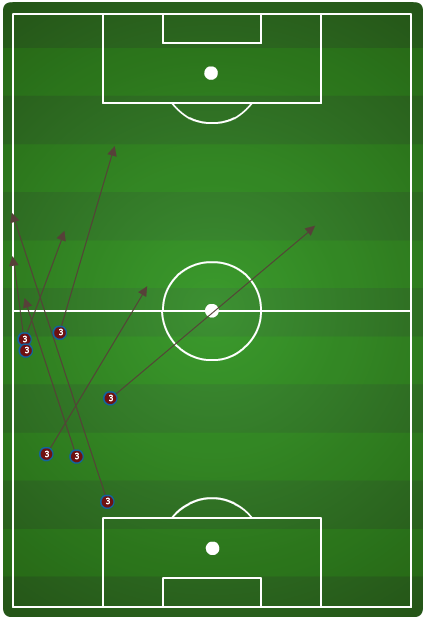 All of Moises' unsuccessful passes were of a longer distance and actually, all were classified by Opta as either a "launch" (a long high ball into space or into an area for players to chase or challenge for the ball) or a "chip" (a lofted ball where there is a clear intended recipient) which are passes of a higher level of difficulty. And a final observation here is that all his unsuccessful passes ended in the opponent's half, reducing the chance of a costly turnover that would result in a shot on goal.

Young defenders are prone to foul more than their veteran counterparts, largely because of their defensive positioning necessitates them to hack the offensive player down to prevent a scoring chance. Hernandez only committed three fouls against the Impact, granted one was a yellow card but upon looking at the play again, I still can't see how that was a foul to begin with. (Yes, his elbow came up but it didn't look like it made contact.) 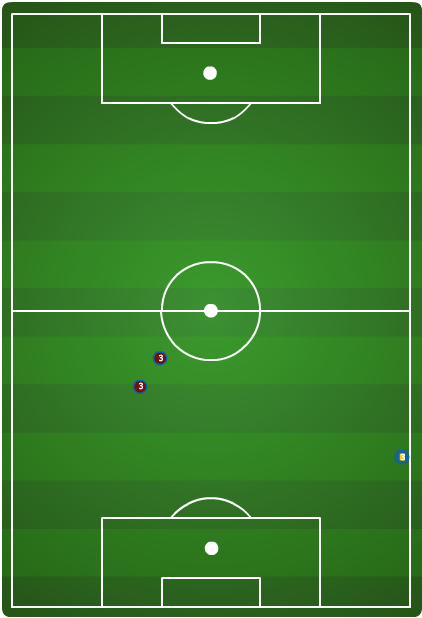 His other fouls were also committed higher up the pitch which negates any dangerous free kicks taken against Chris Seitz. This doesn't pain the full picture, but it does give insight that Hernandez's defensive positioning are solid and you can see why Oscar Pareja trusted him with the start.

Even on the play that led to the Impact's first goal, you could see that Hernandez was the last defender before Justin Mapp sent the cross in to Sanna Nyassi. At first glance it looks like Hernandez just got burned on the play, but his starting defensive position was actually somewhere an experienced defender would have done as well. 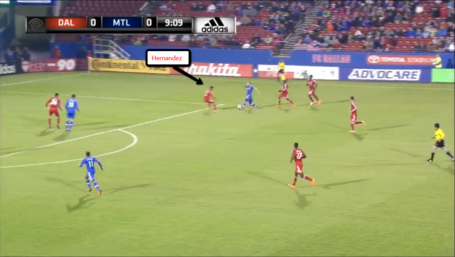 (Sorry this is so tiny.)

Seconds before this screenshot, Mapp had just blown between Jair Benitez and Thomas Hendry and was barreling down with full speed and on his favored left foot as well. Hernandez did the right thing here by stepping into Mapp's dribbling lane and forcing him to his right. He definitely could have done better with his footwork to prevent the cross from coming in, but that is easily correctable with more playing time.

This was a very solid performance from Moises Hernandez and one that he should be happy with to start his MLS career. As he continues to develop as a player, his versatility to play multiple positions on the back line will be an incredible asset for FC Dallas. The future looks bright for him and for the Hoops.