Dallas made moves yesterday and more.

We're over the hump, so to speak in the second to final week of the preseason. FC Dallas is getting set to face the NASL San Antonio Scorpions on Saturday and yesterday they made some roster moves.

Here are some morning headlines for your reading pleasure.

Next week is going to be crazy fun. So much going on, plenty of cool prizes that the club will be giving away. Oh, and there is a game at the end of the week that seems to be a pretty big deal.

The gang at Inside MLS over at Fox take their stab at previewing FCD for the season.

I still wish Warshaw nothing but the best in Sweden.

Just future considerations were sent to Toronto in this deal. Does that mean Toronto is just getting a package of Red Vines and Diet Coke?

I think we should all show our support for having another Texan MLS team.

As much as I want to like where New England is going, this move is a bit odd to me for some reason. I just can't put a finger on why though.

Rodriguez put in charge at Chivas USA | The Goat Parade

I don't think Chivas could have gotten a better guy to be in charge in their final year.

I have to say, I love the tribute to the old NASL team here. Much better than the fans voting for FC Tulsa.

And finally our stadium tour takes us to lovely country of Switzerland, with the Stade de Suisse. 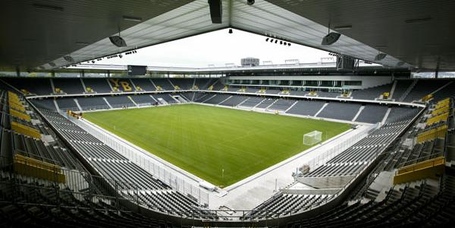 After another season preview, do you think people are hitting the mark on FCD with their comments? What do you make of the two trades listed above? Feel free to discuss that and more below.