After yesterday, I have to admit, the preseason feels like it is finally underway now that we have seen just a little more of FC Dallas in action. FCD down USF yesterday afternoon 5-1, thanks to a hat trick from Blas Perez.

We'll dive into that game a little later on this morning but until then, here are some links to get the morning started off on the right foot.

The club's recap of the preseason win | FCDallas.com

Hopefully Blas scoring three is a sign of big things to come in 2014.

Another recap of yesterday's win. It was also good to see Ryan Hollingshead contribute a late goal.

Bunbury trade was an Expansion Draft strategy for SKC | MLSSoccer.com

I think we'll certainly see a few more of these type of deals this season as clubs prepare for next fall's Expansion Draft with Orlando and NYCFC.

Just when the Red Bulls appear to be gone and done with silly moves, they let one of their own slip away to Mexico.

Even though he was wanting more money at first, I have to say I am glad Edu is back in MLS.

Drogba to MLS chatter continues to pick up steam | ProSoccerTalk

Can we go ahead and try to figure out how Seattle is going to make this move now, or later?

All sides do remember that the deadline to complete these venues was December 31 of 2013 right? Sounds like they will push this to the 11th hour and beyond.

Adu doesn't remind us himself, this just reminds us what an overhyped young player can and can't do does.

That's a pretty big deal folks. It does mean no more Nike around town for the tournament but still, that is a big deal.

I agree, we're running out of things for her to do.

And finally, our stadium tour takes us to Italy today with the Stadio San Filippo. 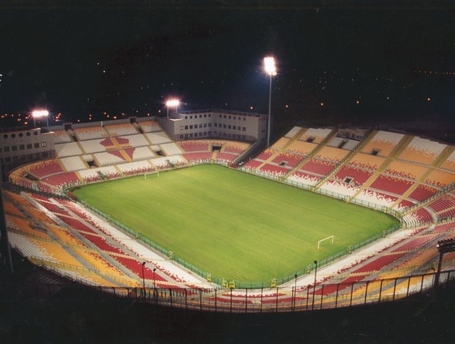 Were you excited by Blas' three goals yesterday? What did you make of the Bunbury trade? Feel free to use this thread for your discussion today.