As the season gets ready to start many of us have already purchased our season tickets. Season tickets are a way, not only to show support for your team, but to ensure you get the best possibly value for seats. Barring the funky "X% off" sales that front offices love to do so much, season tickets are almost always the best and cheapest way to get your tickets for matches.

We here at BDS crunched some numbers and came up with a, very unscientific, chart to show the average season ticket price for all teams across MLS and compared it to how they finished last season in the Supporter's Shield standings. 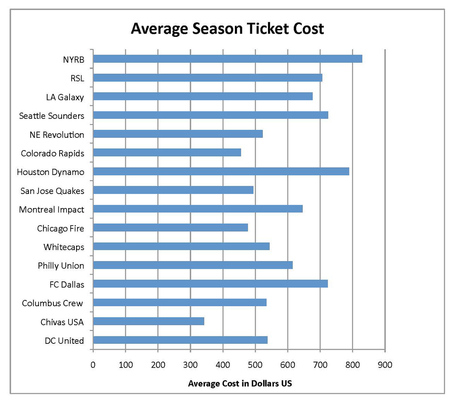 Where did these numbers come from?

First off you'll notice that there are no numbers for Toronto, SKC, and Portland. This is because their front offices made it as difficult as possible to get actual numbers from them about the price of their season tickets.

[Editor's note: This last line has caused some issues, BDS reached out to the various club's ticketing departments for the research purposes of this article. We apologize if this ruffled some feathers.]

I will reiterate that this is by no means a scientific study of the numbers. I took the season ticket prices listed on each teams website and averaged them out. I didn't include special seating such as field seats, luxury suites, and special seating areas such as Colorado's Patio seats and FCD's Cozumel Island Terrace.

I also didn't take into account price of living, parking charges, etc when figuring these numbers. I did however convert the two Canadian teams prices into US dollars.

The Top of the Heap

The Supporter's Shield winners New York Red Bulls had the most expensive average season ticket ($829) by $30 over the next closest team. While I've never been to Red Bull Arena I have heard about the lack of any significant parking and the lots that are there are very expensive. Red Bulls have always had a hard time selling out there roughly 25,000 seat stadium. Maybe we've found a big part of the problem right here.

Not surprisingly the cheapest average ST cost was Chivas USA at only $342 per seat. With Chivas being consistently terrible, and with the worst average attendance in MLS last season at 8,366 it is no surprise that their front office doesn't really have the luxury of charging a price a little closer to their stadium mates LA Galaxy, who average a price of $676, almost double what CUSA charge.

Three things stood out to me on this chart and I'll get to the biggest of them later.

The first is that the Houston Dynamo were the second most expensive ST in MLS at an average price of $789. Not surprising in the sense that they went to 2 of the last 3 MLS Cups, but because Texas isn't a high cost of living state and, as we all know, it's a football state. Soccer in Texas is most often laughed about by the general population. I guess they have to pay for that orange atrocity somehow.

Secondly I was surprised to see that, even with their new stadium being built, the San Jose Earthquakes have an average ST price of $494, which is over a hundred dollars less than the MLS average of $601. I would guessed this to be a bit higher because of the giant horseshoe they are building up in Silicon Valley. Seems San Jose have figured out a way to pay for their stadium that Houston hasn't.

The biggest shock of doing this research was that FC Dallas is tied for third most expensive average with Seattle at $724. It's especially surprising when you think about the fact that the stadium is not downtown and is off of a Tollway at that. To be fair FC Dallas does offer free parking and half priced beer in the Beer Garden, but it's still surprising that we (on average) pay more than DC, Chicago, and (especially) the LA Galaxy.

I know that we didn't take into account the price of living in each city but I would think that the FC Dallas prices would look even worse if you compared what it takes to live in DC, Chicago, and LA, and then compared it to DFW. Not to mention the lack of high powered, big name, national team stars at FC Dallas compared to DC and LA.

Does this mean that FC Dallas fans are getting screwed? I don't think so actually, it just means that the team invests its money differently than other teams. Toyota Stadium is a top tier stadium in MLS and houses one of the top soccer complexes in the US. FC Dallas also boasts, what many consider, the top academy in MLS.

I wouldn't be too upset Hoops fans. If the team continues its poor run of form for the next few years then you would have to think ticket prices would sink along with the teams performance, and more probably the attendance.

Do you think you are getting a good deal for your money as a season ticket holder?