FC Dallas is in Florida, so we're left looking around MLS for other things to discuss.

I hope everyone on this side of the globe had a nice President's Day yesterday. Time to move forward and get ready for another day around Big D. FC Dallas is in Florida as they look to finish out their preseason campaign with a couple games this week before returning to Texas for one final show down on March 1.

Here are some links to get the morning started off on the right foot.

Is a rebrand on the way for Chivas USA? | The Goat Parade

Great scoop by our friends at The Goat Parade. God I hope this one comes true and Chivas USA turns into even the minimal Los Angeles SC or FC.

Horrible news for the young Toronto forward. Outside of the US team this year, I was really planning on rooting for him and Nigeria in the World Cup. Big bummer for him.

Landon Donovan says this could be his last World Cup | Goal.com

I hate to say it, but he is probably right.

Good to hear that the Black-and-Red won't have a big hole in their new kits after all. I still think they have some of the classiest kits in all of MLS.

The league media day was yesterday and plenty of big names were in the Big Apple talking up the league.

No match for Shea this weekend | MLSSoccer.com

Tough news for our old pal Brek Shea, he's out with a stomach bug.

The battle of going from USL PRO to MLS | Fox Soccer

A few clubs have faced this in the past and now it is Orlando's turn to navigate the tricky waters between the lower division and MLS.

If it isn't LA, Seattle or New York pushing the limits of the league rules, it is now Toronto's turn. They're doing a pretty crazy job at it too.

Gosh these are amazing. The Fight Club image gave me a good laugh.

And our soccer stadium tour takes us to Colombia, as we see the stadium that newcomer Andres Esobar used to play in, Estadio Deportivo Cali. 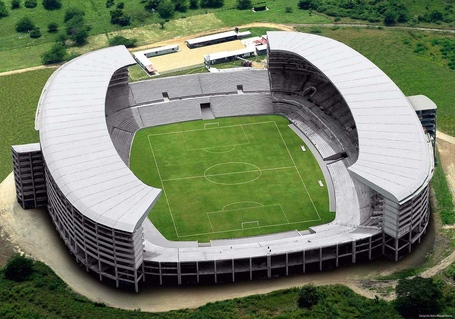 Feel free to use this thread for your discussion today. Are you getting excited about the upcoming season? Can you believe we're less than three weeks away from the first game?