Well the weekend was short lived but at least we're inching closer to the start of the regular season. FC Dallas is heading to Florida today to train for the week, along with playing a couple of games, we'll have a couple reports coming up later today and tomorrow on all of that.

Until then, here are some morning links to get your new week started off on the right foot.

Clavijo on the added firepower | FCDallas.com

Clavijo loves the speed options that FCD now has on the wings with Andres Escobar and Fabian Castillo.

I guess yesterday was a de facto media day for the club to do head shots and what not.

It's media day at @ToyotaStadiumTX which means haircut day for some of the guys. pic.twitter.com/IiUIF05Xr8

The good and the bad with loans in MLS | Fox Soccer

A good little backgrounder on why some loans work and why some just do not in MLS.

No excuses for TFC | Fox Soccer

There truly is not excuse for Toronto FC to not reach the playoffs in 2014 now. The thing is, as good as some of their roster is, the depth is so darn weak there.

The headline really made me laugh, he has no way of reaching the World Cup this year...if ever at this point in his career.

It sounds like our old pal Kenny is doing well up in Seattle. Can you still root for him even though he is a Sounder?

Again, this looks lovely for DC United but I cannot for the life of me get overly excited by it until I know shovels are in the ground and things are actually being built.

Kljestan scores in victory over the weekend | Goal.com

Definitely a solid weekend for Sasha Kljestan. His World Cup hopes are looking pretty solid with outings like this.

Julian Green to train with the US team | Goal.com

The highly-regarded young winger/forward from Bayern Munich could be a big get for the USMNT going forward. Maybe not a World Cup player this year but definitely one for the future.

As much as I want this to be true, I have a feeling it won't ever be taken away from them.

Having a strong rivalry in Florida is going to really help both Orlando and Miami once both are playing in MLS. Hopefully they can keep the tension going between one another for a couple years though and not let it fizzle out when Miami comes into the league.

How supporters in Nashville have created a team out of nothing | MLSSoccer.com

A great long-form article on how the grassroots effort in Nashville has gone from an idea to reality.

I played the regular version of this card game over the weekend with some friends, I highly recommend it. So ridiculously funny. I can only imagine how fun the House of Cards edition is too.

And finally our soccer stadium tour takes us to the third division home of English side Milton Keynes Dons FC, Stadium mk 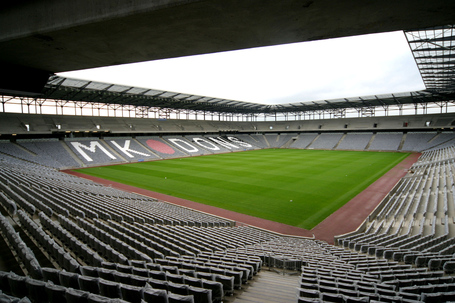 How was your Valentine's Day weekend? What do you think of the news about Qatar? Can Freddy Adu finally get his career on track? Feel free to use this thread for your discussions today, we'll have more preseason coverage up here shortly.