FC Dallas is heading back home after a stay in the UAE.

After nearly two weeks away, FC Dallas is home...or at least very close to it depending on their flights.

Since the club is in transit, there isn't a ton of FCD related news to discuss this morning. But here are some links to get the morning started off on the right path.

Raul Fernandez checks in at number five, I can't say I disagree with that ranking one bit. Though I still don't understand how so many people overvalue a keeper like Donovan Ricketts. He's good, sure, but man his positioning is bad at times, which is why he ends up with so many crazy saves.

There has always been a question as to whether or not he would make the jump to MLS. For me, I would be very excited to see him come play here as he was always a favorite of mine when he played at Chelsea. Sure he is up there in age but he's still a fairly big name. Question is, who can land him?

Kind of funny when a rival wants to offload a Designated Player on another rival. Even funnier when the club that is looking at the player doesn't like the offer from their rival. I'd still like Laba here in Dallas but we know that isn't going to happen.

I'll admit, I don't watch a ton of Bolton to know a lot about Knight but Philly is certain piecing together a nice club for this season.

CBA Talk and what it all means | Brotherly Game

I have a feeling this is the first of many...many articles posted on the MLS CBA discussions this season. Nice starting point is here for sure.

Only New England fans would be clamoring for the SuperLiga tournament to come back. As much fun as I had in the one year that FCD was in it, I couldn't stand this tournament. Such a waste.

I meant to have this link in the daily links the other day but forgot to include it. Very good discussion on Atlanta and their expansion hopes.

More details on the SKC academy player who opted to go pro with the USL PRO team instead of his own club.

I know there are people out there that want MLS clubs in the Copa Libertadores but I just don't see it happening any time soon, if ever. Just too many hurdles standing in the way.

Could we be heading towards a strikes from our refs? Please? Could we?

Beans in Chili or not? | Dallas Observer

I'm not a chili guy at all but someone settle this for me.

And now we take you to Bolivia on our stadium tour with the Estadio Hernando Siles, most known for being a stadium that FIFA has looked to ban for international games. 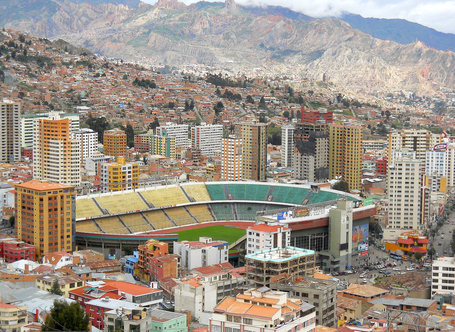 What do you all make of the labor situations in MLS both with the players and officials? Would you want a MLS team in the Copa Libertadors tournament? And lastly, is there a market that is truly ready for MLS? Feel free to use this thread for your daily discussion.