Well, the second preseason friendly didn't go nearly as nice as the first one against BK Hacken for FC Dallas. A 3-1 loss yesterday evening in Dubai, as Fabian Castillo scored the lone goal for FCD. We really don't have a ton to go off of in that game, like how players played and all. So we'll leave it at that.

Here are some morning links to get your day started off on the right foot.

Hey, at least we can watch the loss in a short form here. It also turns out that this is the last preseason game in the Middle East for FCD as well. The real tests will come in Florida later this month.

Ives lists a players for every team in this article, Kellyn Acosta is the FCD rep. I can't say I disagree with that though I would have mentioned Danny Garcia too.

Even though Beckham already has a billionaire in Marcelo Claure, landing another oil-rich owner from Paris Saint-German would be pretty darn impressive to see the league get. His ownership team will end up being pretty impressive when it is all said and done.

While I think the West will still be better as a whole, the Eastern Conference sure has been fun to watch this offseason.

Awesome, the one stadium name in MLS that I hated to type out is getting a change.

You know someone at the league office is wishing they would have been able to get these two on the pitch against one another more this season. Blame that unbalanced schedule then.

Where will Landon Donovan play this season? | Fox Soccer

The title of this post makes me laugh and want to give a sarcastic answer like "at the StubHub Center and a dozen or so away venues". But seriously, this will be an interesting season for Donovan and the Galaxy.

If you need a good laugh, here ya go.

And our stadium tour takes us to Turkey's Kadir Has Stadium. 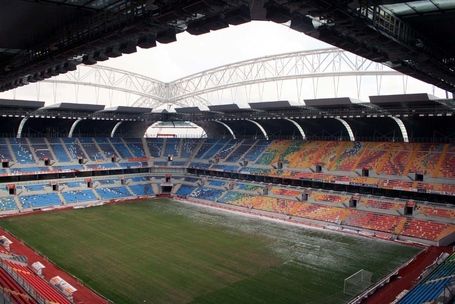 Feel free to use this thread for your daily discussion. Anyone watching the Winter Olympics? I've practically filled up my DVR with it.