FCD was in action yet again in the UAE.

Welcome to the first Big D Daily post, the winner in our naming contest for this post. It just edged out Hoop du Jour by two votes. Impressive.

FC Dallas was in action early this morning, we'll have more on that later today. Until then here are some links to get your week started off right.

Another blog post by the PR staff at FCD. Lately they've been hanging around the desert when they haven't been beating up on a Swedish team.

FC Dallas and their UAE adventure | The National

A nice report on just why FCD decided to go to the Middle East for preseason training. It is all about getting a leg up on the other MLS teams that would want to partner up with some Middle East folks.

More info on the tour and how FCD is the first MLS team in the Middle East...or Middle Easy as we like to call it around here.

If you were interested in who BK Hacken had on the pitch last Friday, here ya go.

I meant to touch on this on Friday but had never got to (you can blame it on Friday being my birthday). Still, you all can breathe easy now, DF10 will not be returning to Dallas in 2014 despite the talk that Oscar Pareja had recently, saying he would explore the option.

All the preseason action you could ever ask for | Fox Soccer

You want highlights? Just go no further than to right here to see all the preseason highlights that you might have missed over the weekend. Apparently there were some Cascadia matches this weekend.

Jermain Defoe given a nice sending at Tottenham | MLSSoccer.com

I have a feeling he will do just fine in Toronto. Maybe not David Beckham-fine and winning two MLS Cups for Toronto but he will certainly do more than some DPs we've seen over the years.

Wheels in motion for NYCFC and Jason Kreis | Fox Soccer

While the stadium situation for NYCFC is still a bit iffy, everything else that they are doing is impressive and will continue to be impressive.

I've been told Miami is very similar to Dallas, they root for winners. But then again who doesn't? Still, saying that, they will need some big names to go along with a nice stadium.

I swear, our US right back situation is cured, cursed.

Boy it is getting rough for Manchester United | ESPNFC.com

A 2-2 draw with Fulham this weekend? Yikes. I only bring it up because it is always fun to see ManU fans get riled up over it.

While some people I know loved their videos, and others complained about it (seriously, it was free get over it), this is really the only one worth watching.

And now, your soccer stadium journey takes you to the other Toyota Stadium...in Japan. 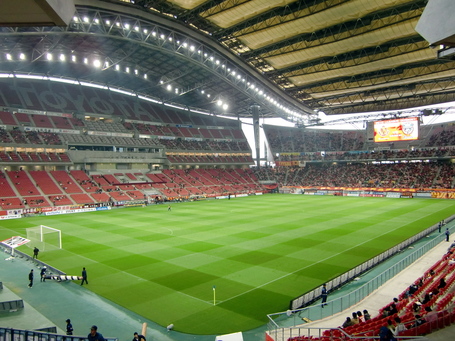 Feel free to use this as your discussion for the day.