Not even a full week down and Oscar Pareja has already thrown out the 4-3-3 talk.

Share All sharing options for: About That 4-3-3 Look For FC Dallas

I wanted to touch on this last week but you know how it goes - life just sort of got in the way - so we're left to discuss this lovely topic today. Yes, you know the topic just by staring at the headline. We're talking formations and all that jazz.

Last week, new FC Dallas head coach Oscar Pareja told the media at his unveiling that he would likely be switching things up to play a 4-3-3.

"There are some variations in a 4-3-3 depending on the three in the middle," explained Pareja. "If you want to do it with the triangle inverted, if you want to do 2-1 or 1-2. I like the wingers, I like that way. Probably the majority of my time in Colorado, it was like that."

So as one might expect and as most of you already talked about on here, a 4-3-3 is in the works for FC Dallas this season.

I'm here to tell you all that move won't be hard at all for this current group of players. The 4-2-3-1 that former coach Schellas Hyndman used over the years isn't that big of a deviation from a 4-3-3. Plus, like Pareja said in his quote above, it all depends on the middle three. You either sink two in front of the defense or play a bit more of a wide game.

FCD currently has a crowded midfield when you look at the roster. We know that we'll see some variation of Peter Luccin, Andrew Jacobson, and Adam Moffat in that middle three. Whether or not we see two of them sitting in front of the defense will remain to be seen. 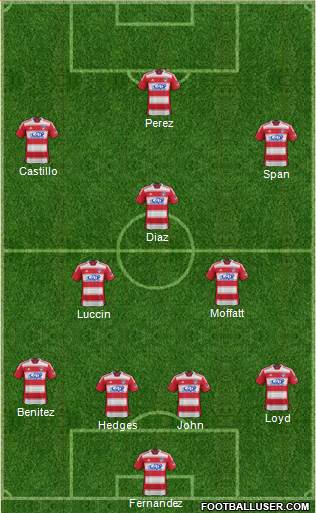 I should point out that we shouldn't get too fixated just yet with who actually starts. I placed Brian Span in there just for kicks, and to make sure none of you grumbled too much at the sight of seeing Je-Vaughn Watson placed in there. This is going to be more about where the parts actually go. Which was always a problem if you really think about it. FCD has always had the talent, it was just a matter of using that talent correctly was the bigger issue under Hyndman.

But what if the club actually signs a box-to-box Designated Player? What would that actually look like? It's fairly simple really. 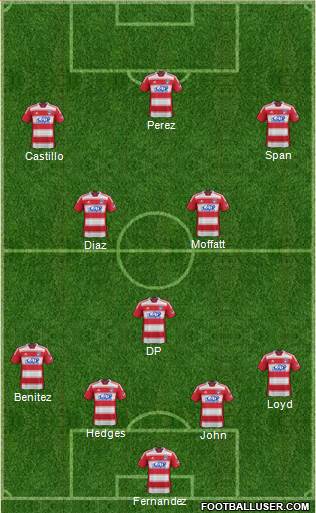 This is fairly similar to what we saw out of Seattle late in the season last year. Osvaldo Alonso was the glue in the middle of the park, sitting just above the Sounder defense. The only difference was Seattle would use a diamond midfield with two strikers above. Dallas right now doesn't have that kind of luxury as Blas Perez remains the only real option up front. Until someone else emerges as a solid partner for him in that kind of formation, a 4-3-3-type of look is where this club is certainly headed.

Right now the club is certainly more ready to use the first example than the second. If we know Luccin can be healthy for 30-plus games this season, then maybe we may already have an option for that box-to-box spot. Or maybe Moffat will surprise us. Or who knows, maybe even Bobby Warshaw or Kellyn Acosta will fit that mold better. The fact remains, we're only three days into the preseason. A lot can and will change between now and March 8.

So how do you see things shaping up this season for FC Dallas with this sort of look? Are you worried that the lack of a box-to-box signing that has been talked about since October hasn't arrived yet? Are you disappointed that a 4-4-2 never worked out here?