Schellas Hyndman's been saying 4 more wins, but the reality is more complex

Share All sharing options for: What is FC Dallas' Real Playoff Requirement?

What do we need to do? Every MLS team asks that question around this time of year, as do their fans. Seattle is trying to gauge the point total they will need to hold off all would-be Supporters Shield usurpers. DC United should be more worried about staying at the top of the draft and allocation order.

Most people study the problem in whatever way they think is best and cling to the number that they think is right. For Schellas Hyndman, that number is 52. As evidence by his proclamations that the red stripes, currently on 40 points, need to win 4 more matches, he's saying 52 is the magic point total. As is often the case though, the truth is much more complex.

Even with only 5-7 matches left for all teams, there are 2,954,312,706,550,833,698,643 possible combinations of results for the remaining MLS fixtures. That's only based on win/loss/tie, not adjusting for scoreline. Some of these outcomes are certainly more likely than others, but it should be equally obvious that no one has a clear picture of where their conference rivals will land, let alone their own future results. Thus, every potential point total for FC Dallas is best viewed on a continuum of possible table placements. 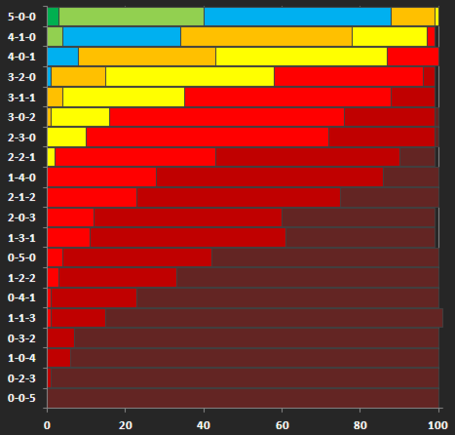 There you have it, coming straight from Sports Club Stats' FC Dallas page. These figures are based on that site's Monte Carlo simulations of every remaining MLS match, weighted by goal differential and home field advantage.

While Hyndman is right that 52 points (4-0-1) would very likely be enough (and might even earn them a bye) there's also a 13.5% chance they would still miss out on the postseason. It is smart of Hyndman to aim that high, though, because the odds do drop quickly.

On 51 points, sneaking in is the most likely outcome, but there's a 41.4% chance that results would still break against them and leave them no higher than 6th. On 50 points, 6th shifts to overtake 5th, but playoff odds are still very respectable. 49 points is pretty much the bare minimum (with 3-0-2 a little better than 2-3-0), and reaching the 5th seed with that record would require an advantageous implosion in Colorado, Portland, or LA.

Surprisingly, FC Dallas control their own destiny even now, though. In fact an, admittedly, improbable 5-0-0 streak to 55 points would see them through to a top 3 bye in 88% of scenarios. While this team looks far from primed to close out the season by taking full points, weird things can happen over 5 matches.

However, I wouldn't call this optimism, because 72% of these simulation have FC Dallas ending the season with a record between 45 and 50 points. It's probably over, but the team should not see their situation as hopeless, though fans are free to emotionally prepare for the worst or best in whatever way they prefer.