The Playoff Equity at Stake This Weekend

Share All sharing options for: The Playoff Equity at Stake This Weekend

Thanks to San Jose and Vancouver winning last week, the playoff races are getting decidedly more interesting at the time of year when they usually narrow. Only three clubs have been eliminated and none have clinched, though Seattle, Real Salt Lake New York, Kansas City, and Montreal would be hard pressed to miss out even if they tried.

That leaves an unreal 11 teams on the bubble for 6 spots. Here's the breakdown of each potential result's importance for the Western bubble, as always based on Sports Club Stats' Monte Carlo simulations: 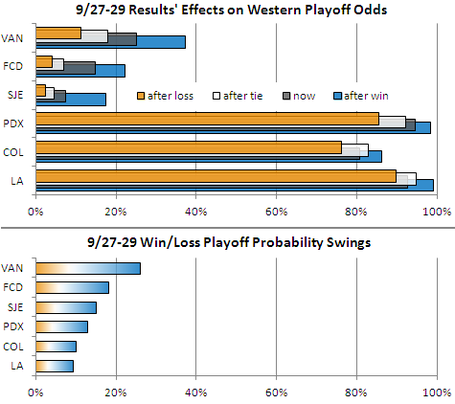 Desperation is the word of the day. Ties or losses would be crushing for the slim hopes of Dallas, Vancouver, and San Jose. The Whitecaps might be able to bounce back from a draw, but FCD and the Quakes probably can't. Of course all three are also rooting for the Galaxy, Rapids, and/or Timbers to slip up, widening their window to catch them. Oh, and since neither are on the bubble, New York at Seattle isn't reflected on these graphs. As Zach Slaton has expertly pointed out today on Forbes, that match is absolutely massive to the Supporters Shield race. 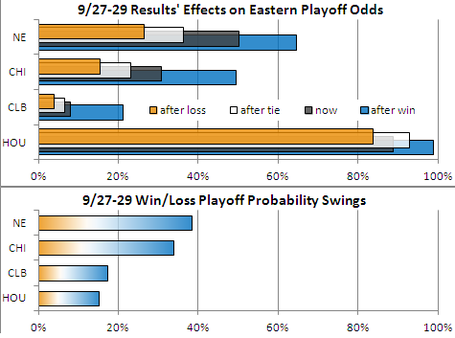 Houston at New England tomorrow night looms as the most important match to the playoff race. Chicago and Columbus join New England in do or die mode. Houston doesn't have to get a result against the Revs, and neutrals should probably root against the Dynamo because their dropping points would make even more drama possible next week.

There will be 9 matches this weekend, and 8 will involve at least one team on the bubble. Tune into anything other than DC United at Toronto FC and you should see some nice, dramatic desperation on display. Should be fun.