A Look At FC Dallas On FIFA 14

EA Sports released their newest version of the FIFA series this week across multiple platforms.

Share All sharing options for: A Look At FC Dallas On FIFA 14

I, like probably so many of you, enjoy the EA Sports series FIFA. Each year I get the game in some form or fashion, though this year it appears I'll only be able to do the iOS edition until later this fall when I finally break down and upgrade my game console at home.

I thought since FIFA 14 was released yesterday that it would be a good time to take a look at how the game views our club, FC Dallas.

The new FIFA 14 has some cool features to it like all editions have in the past. On the iOS game (and I assume the other platforms) you can download updated rosters that actually bring in current form of players. Yes, current form that changes their player ratings. Pretty cool and also pretty dangerous to see in some ways.

I decided to start a manager mode with FC Dallas to see who the game thought should be starting and how the game also laid out the player contracts, ratings and other details.

First up, was the board recommendations for the year. I only had two, unlike the other manager mode I started with Chelsea in the EPL, which had five. The first recommendation from the board was to reach the top half of the table this season. The second was to re-sign Jackson to a new three year deal. Yes, Jackson. I'll explain that more in a moment.

Here was a quick look at who the game had as the regular starters: 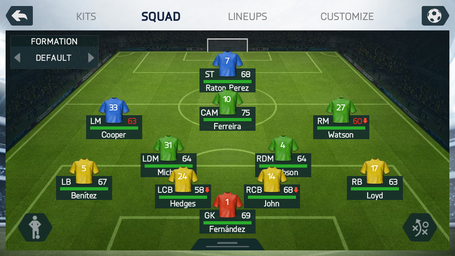 Yes, Blas Perez's name seriously comes up as Raton Perez. The red means the player ratings are trending down due to current real form of these players. Je-Vaughn Watson is also a starter of Fabian Castillo and Jackson. Same with Kenny Cooper. Zach Loyd isn't hurt on this game so he is starting over Kellyn Acosta. Michel and Andrew Jacobson are in the midfield like we saw earlier this season.

Now for the bench: 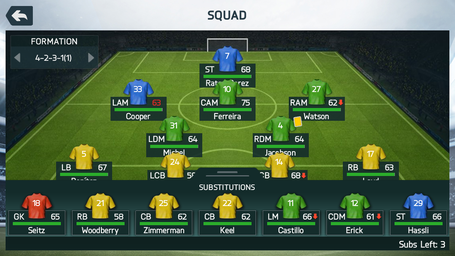 Yes, as strange as the board recommendations were to re-sign Jackson to a long deal, he isn't even considered for the team's top 18. London Woodberry and Stephen Keel are instead.

Now for the rest of the roster: 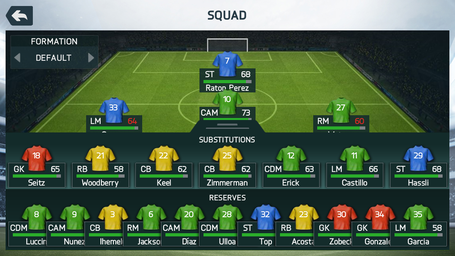 Okay, so we finally see the rest of the team here. Jackson is there, as is Mauro Diaz and Acosta. It is a little hard to see the ratings here on this screen so I'll list them out below for you.

*Prices and ratings may not reflect your exact experience since the ratings fluctuate if you download current rosters.

As you can see, players like Bobby Warshaw, Richard Sanchez, Bradlee Baladez and Moises Hernandez are not listed on the club roster because they are out on loan. Since all four player's teams aren't in the game, I have no way of reporting their value or ratings.

So far the game experience, even on the iOS is pretty sleek like in previous editions of the game. There are new touch controls on the iOS that are pretty interesting to use. I picked up a red card on my first tackle with Benitez (go figure), just minutes into my first match. Thankfully it was a friendly.

Have you gotten FIFA 14 yet? If so, share your experience below.