The Next 3 Days' MLS Playoff Implications

Examining the weekend's potential ramifications for clubs on the Western and Eastern playoff bubbles.

Share All sharing options for: The Next 3 Days' MLS Playoff Implications

Last week I broke down the weekend's matches' impacts on the playoff race. It was such a hit that I'll try to make it a weekly series.

To review, Sports Club Stats runs Monte Carlo simulations for the remainder of the MLS season, basing each matchup's odds on home field advantage and the goal differential for both sides. On the individual team pages they tell you how each potential result should effect that club's chances.

I'm just presenting those findings her graphically so that it's easy to see the stakes for each club. I'm leaving out New York, Seattle, Salt Lake, Kansas City, and Montreal who have all essentially clinched, and there's no point discussing thankful-there's-no-relegation Chivas, Toronto, and D.C. 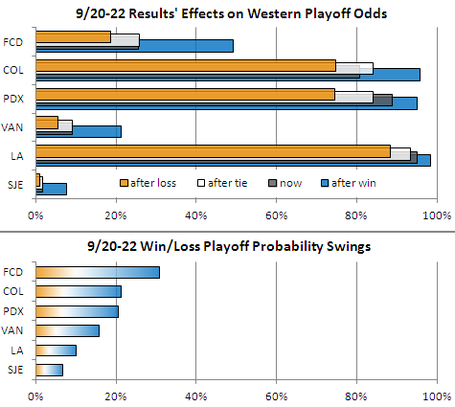 Despite last week's loss, FC Dallas has a big opportunity to put pressure on the teams above them. Because Colorado and Portland play each other, either one of them will drop three points or both will drop two. A red stripes win in New Jersey is far from the most likely outcome on Sunday, but it would guarantee that they gain ground at least one of the clubs tightly packed between third and fifth.

The Colorado-Portland odds in the first graph are unbelievably similar. If the Rapids lose they will have a 74.7% chance, while a Portland loss would mean 74.5% for the Timbers. Tie and they have identical 84.2%, while a win is also only 1% different. Neat little statistical oddity, that.

Vancouver and San Jose still need multiple results to truly re-enter the race. "Re-enter" may be a misnomer for the Earthquakes, whose Sports Club Stats odds haven't been above 20% since May.

On the opposite end, LA's soft remaining schedule makes their missing the playoffs improbable, so even losing to Seattle at home wouldn't be terribly damaging, as long as they get back on their feet after that. Really, that fixture has much more with the Supporters Shield. LA can officially kiss that silverware goodbye if they don't win, while Seattle could put a stranglehold on it with a road upset. 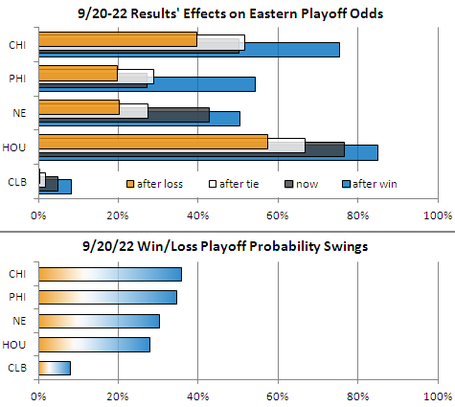 Unlike last week, none of the four on the Eastern playoff bubble are facing off against each other, but it's only slightly less vital for each one that they get a result. None of them can feel very secure, and once again Columbus is the only one here who wouldn't help themselves immensely with a win.

This is a good place to mention the inter-connectivity going on here. Playoff probability in each conference is zero sum. This means that if, for example, Chicago beats Columbus, the Fire's playoff odds go up by 25.1%, then that 25.1% gets distributed negatively among the other Eastern clubs. Per the various team pages, it would look like this:

Essentially, what we are left with is that once we remove all who have essentially clinched or been eliminated already, across MLS we are left with 5 clubs that desperately need to win in order to improve their position: Dallas, Houston, Chicago, New England, and Philadelphia. Meanwhile, Columbus, San Jose, Vancouver will need results beyond this week to join the fray, and Colorado, Portland, and LA are just trying to hold off FC Dallas.