It is amazing what you can do when you work the ball wide with pace.

Share All sharing options for: Goal Breakdown: The Seven Passes That Lead To David Ferreira's Goal

One thing I always like to bring up that FC Dallas does well at is playing the ball wide with pace. Last Saturday against the Colorado Rapids, Dallas did just that in their lone goal scored by David Ferreira.

Dallas had a nice seven-pass build out from the their defensive third. George John won the ball in the open space and immediately played a long ball to Fabian Castillo, who quickly lays it off for Ferreria. The former league MVP played a quick one-two with Blas Perez before he played the ball wide to Castillo. The young Colombian then found the run of Jair Benitez who then sent a blistering ball into the penalty box where Ferreira crashed into it for the goal.

So let's break down this play. 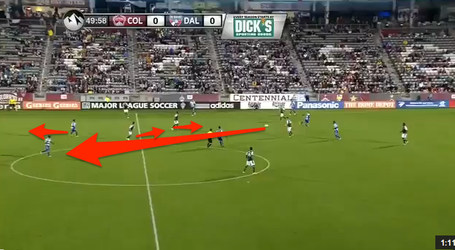 From here you can see John passing the ball long up to Castillo, who immediately will lay it off to Ferreira. The two Colorado midfielders here are seen pushing up towards John on the play, leaving the midfield exposed. 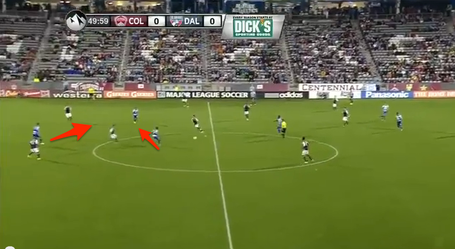 As Castillo lays the ball off to Ferreira, Perez is making a break back towards the ball. This is big as it draws at least one, if not two of the Colorado defenders with him. 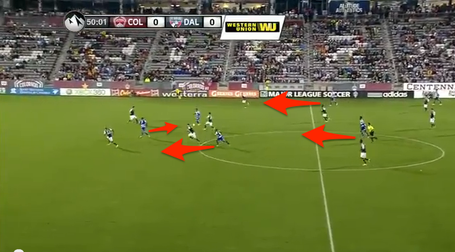 This is the quick one-two between Perez and Ferreira. As this takes place other Dallas players begin to follow suit in the counter attack. Castillo also begins to go wide in the play. 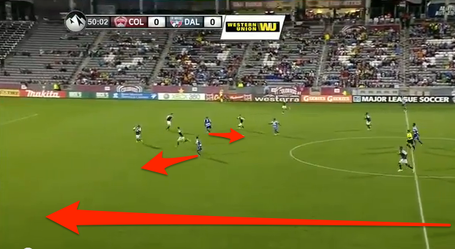 As Ferreira gets the ball back he begins to push the ball quicker up the field. Castillo is pushing wide as well as he is set to get the ball back from Ferreira. Out of the frame is Benitez. It is pretty remarkable how long of a run he makes on this play, given how you can't see him until the very end of the play when it matters most. 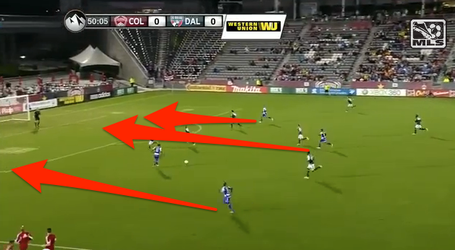 Finally, Benitez is in frame as Castillo is getting the ball near the penalty box. Perez is already beginning to crash the box and Ferreira will soon join him. Back to Benitez for a moment, his run forces Atiba Harris to track back and what you can get from this screen shot is that Harris not only has to track back with Benitez but he also has to go about 10 yards wide to catch him, even with his speed that is difficult to do. 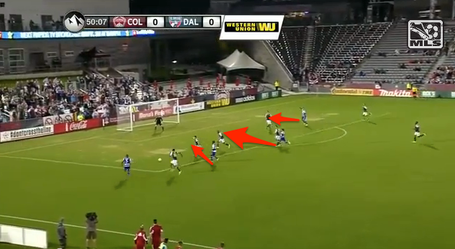 Castillo laid the ball off wide for Benitez as the Dallas players rush the box. 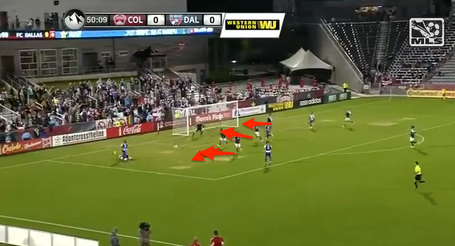 And thanks to a perfectly weighted ball, Colorado defenders are left scrambling to find runners in the box. Perez lays off his run as Ferreira rushes towards the middle of the penalty box to crash into the pass from Benitez to score the goal.

Here is it is in its full glory.

We learn from this that playing the ball wide with pace certainly works out for this club. Hard to believe that the last four goals scored here have come from the run of play as well.