Many fixtures this weekend clearly have playoff implications, but just how important are they?

Share All sharing options for: Playoff Importance of this Saturday's MLS Matches

As summer turns to fall, the MLS playoff races are entering squeaky bum time, as Sir Alex Ferguson would say. Overwhelming probability has five clubs already reserving spots in the postseason (Salt Lake, Seattle, Montreal, New York, and Kansas City), and three others without anything left to play for (DC, Chivas, and Toronto). That leaves 6 clubs scampering for 3 spots in the West and 5 fighting over 2 Eastern ones.

So, how squeaky should MLS bums be this weekend? Taking inspiration from Zach Slaton's excellent piece on the Supporters Shield implications of Real Salt Lake visit to Seattle tonight, I felt that Monte Carlo simulations would help answer the question. To perform a Monte Carlo sim you weight the strength of each club, and simulate the outcomes of their remaining matches based the relative weights of the two sides (adjusted for home field advantage). The resultant probability gives you a good feel for how likely each club is to end up in the league table.

So, I just needed to see how likely clubs will be to make the playoffs if they win, lose, or tie this weekend. Unfortunately, I didn't have the time or computer power available to run such sims on my own. Luckily, Sports Club Stats' MLS site had already done so for me.

Based on their simulations, we can focus on the six bubble teams in the West: FC Dallas, Colorado Rapids, Vancouver Whitecaps, Portland Timbers, LA Galaxy, and San Jose Earthquakes. Below we have their playoff percentages today along with their likely percentages given every possible result tomorrow. 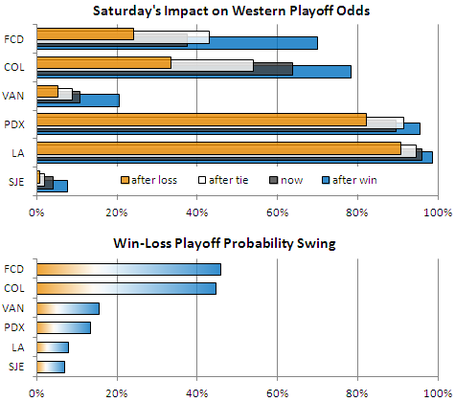 Unsurprisingly, the two clubs right next to each other in points per game, Colorado with 1.50 and Dallas with 1.48, in 5th and 6th in the West have a lot at stake when the meet tomorrow night (God willing). The playoff probability swing between winning and losing is well over 40% for both club. That's not far off of the importance of a single leg of a home and home playoff series, which is pretty crazy.

Past that, Vancouver and SJE will need more than a single win to become true threats in the playoff race. Meanwhile LA and Portland should be mainly concerned with locking down a bye through a top three seed, since they would need a string of losses before they would truly be in dire straits.

So let's adjust the earlier assessment of 6 fighting for 3 spots. In reality this has suddenly become a two team race, with the two suitors going head-to-head for inside track to the 5-seed tomorrow night in Commerce City, Colorado. 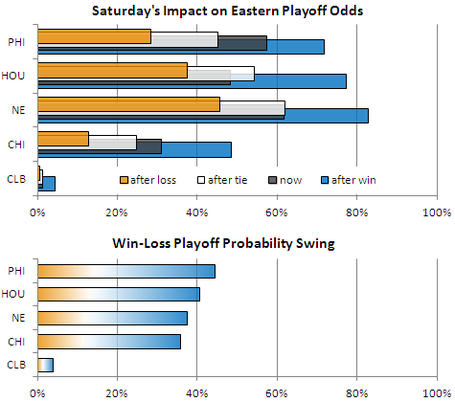 Out East, Dynamo at Union and Revolution at Fire seem to be slightly less important than FCD at COL, but they are still vital fixtures in the playoff race. Chicago should be most desperate of these clubs, since a loss would firmly cement their position as the East's dark horse. Much like San Jose earlier, Columbus might not deserve a place in the playoff conversation, but there can at least be open debate over whether or not they can be written off already.

Where do we go from here?

Sports Club Stats' sims are a little simple, driven entirely by goal difference this year, but the relative probabilities here are more important than the literal odds anyway. In other words, don't get too hung up on whether you think Dallas' current playoff odds of 37.5% are generous or conservative. What these number do best is point out the importance of results tomorrow, and FC Dallas would take an enormous step forward with an upset win on the road. Also, if you're watching a match and the commentators are pontificating over how much Columbus, San Jose, or Vancouver can help themselves with a win, feel free to ignore them.

Between Dallas at Colorado, Houston at Philadelphia, and New England at Chicago there are plenty opportunities to watch matches that will have a profound impact on the playoff races this weekend. Of course, RSL at Seattle and Columbus at Montreal will put their own marks on the Supporters Shield chase, too. One other thing of note: while loss-avoidance is very valuable in all of these clubs' cases, none of them benefit a great deal from a tie. Hopefully instead of managers just trying to squeak out one point, there will be some aggressive tactics on display this weekend.

And if you want a longer view of the playoff race, here's a viz of the points per game every club will need over their remaining matches if they are going to be in the running for the playoffs or the Supporters Shield: