Three Questions Going Into The Fall For FC Dallas

It isn't just about whether or not FC Dallas can make the playoffs. There are plenty of questions to be asked as the club hits the final two months of the season.

Share All sharing options for: Three Questions Going Into The Fall For FC Dallas

Going into the final two months of the season, there are plenty of big questions surrounding FC Dallas. Will Schellas Hyndman's club make the playoffs is arguably the biggest one. But I have a few more questions in mind that could help shape the answer to the one about reaching the playoffs.

Over the last month, the talk has largely centered around whether or not Hyndman can get his preferred 4-4-2 formation. He finally seems to have a defensive midfielder in Erick that can do some of the heavy lifting. He has a guy in Mauro Diaz that appears to be a huge addition to the midfield. Blas Perez has been a monster lately in the goal scoring department

But can Hyndman really get his way and move to a 4-4-2? Finding the right partner for Perez may be the biggest key left in this though. Kenny Cooper hasn't scored a goal since May in league play, and has largely been ineffective from the wing. Fabian Castillo is a threat from the wing but we all know his limitations by now on the defensive side of the ball. I've often argued that I would rather have Castillo up front with Perez rather than Cooper with Perez. But that may still just be me.

Then there is the question about Michel. Do you play him in the midfield? Or in the back? I'm honestly surprised we haven't seen him get any minutes at left midfield this year. That would keep him on the field for those vital set piece chances and give Jair Benitez the support he needs on the left flank.

Here is a possible 4-4-2 that I would like to see played at some point. 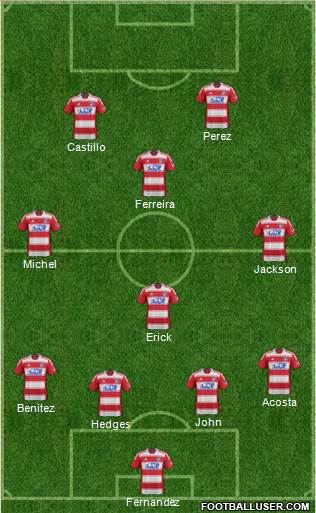 But of course that means Diaz and Cooper are left out of the mix. Same goes for Andrew Jacobson when he gets healthy. And Zach Loyd too.

Is this the perfect formation for Hyndman and this group? Maybe. Maybe not. At this point in the year, it may be the million dollar question.

Will Dallas be active before the roster freeze?

The final roster date in Major League Soccer is set for September 13. That is the freeze date for the rest of the year, meaning no moves can be made until after the MLS Cup is over.

In years past Hyndman has added guys in late August and early September for those final few games in the regular season. Some moves have been great like in 2009 when he added three key parts in Ugo Ihemelu (trade with Colorado), Daniel Hernandez and Heath Pearce. But he and Fernando Clavijo have also had their share of busts too like last year with Matias Jara, remember him...I didn't think so.

Dallas could be getting Peter Luccin back by October, which could end up being the addition to the roster. That would be a win-win situation as it brings in a guy that has been with the club all year and is a veteran player.

As hard as it is to bring in anyone new at this point in the season, don't put it past Hyndman and Clavijo to role the dice once more if something comes up. My gut tells me though they could be more willing to trade within the league rather than going outside to get someone new. But that is just a hunch on my part.

Will the offense be consistent without Perez?

The upcoming World Cup qualifying dates are going to be very tricky for FC Dallas. Right now Perez is set to miss next weekends Vancouver game. In October, he'll likely miss the Chicago game as well seeing how he'll be in Mexico City on October 11 and then in Panama on the 15. That also puts his chances of starting in the Seattle game in question as well. Hyndman has typically not started Perez in the past when coming back from international duty, mostly due to travel and such.

But those are all key games for Dallas down the stretch where the offense will have to flow through someone else. The Vancouver game will be really troubling seeing how Cooper is suspended, Eric Hassli is hurt and Bradlee Baladez is on loan. That leaves just Jonathan Top as the lone available striker on the roster.

Perez currently leads the attack with 10 goals on the year and the next highest scorer on the club is Jackson, with THREE. Dallas had done well in the goals scored by a committee earlier in the year but it isn't a fad that can last during important stretches of the season. That means someone else has to step up in a big way over the next two months to help carry the load with Perez.