Was Je-Vaughn Watson's Performance Against San Jose That Good?

Schellas Hyndman told reporters that he believed Watson's best performance of the season was against San Jose.

Share All sharing options for: Was Je-Vaughn Watson's Performance Against San Jose That Good?

What do we make of Je-Vaughn Watson? That seems to be a question that has been widely asked, answered, debated, questioned, and anything else in between this season.

The Jamaican midfielder came over from Houston in the pre-season as a depth move and has been quite a polarizing player for FC Dallas fans.

Last weekend against San Jose, I was no shocked to see him start at right midfield due to the suspension of Jackson. In the 71 minutes that he play, he helped set up the first Dallas goal to Blas Perez. In all, his night wasn't that bad. As manager Schellas Hyndman put it to 3rdDgree.net, it was one of his best games of the year.

"I think it might have been one of his best games. What kind of hurts Je-Vaughn is he works extremely hard and then he just makes bad decisions. And that's why you don't get a cross country guy coming out to play soccer. He can run all day long but every ball he gets is going to give to the opposition and I think Je-Vaughn's been asked to do a few things. One of them's center midfield, one of them's flank midfield," Hyndman said.

Some will debate that, we've already talked about it in our game grades this week. Looking at his stats and chalkboard I'm starting to fall more in line with the Gaffer. During the game Watson had 24 successful passes (seen below to the nine unsuccessful. 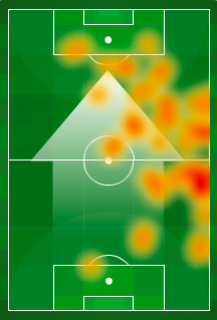 For a guy that has been asked to play in the middle this year it was also good to see that he didn't track too much into the middle like some players tend to do.

But when Watson is out wide he is more at home. His pace is solid enough to take on players as he did against San Jose. His vertical game is pretty good as he won a few headers, including the one that set up the goal to Perez.

More importantly, from this past game, we're seeing him not make nearly as many bonehead passes out of the middle of the field as we've seen in previous games.

Is he the answer for this club on the wings? No. But going forward he is at least a viable option off the bench and in a pinch when the club is dealing with injuries and suspensions.

I'll put it to you this way, he's a major step above James Marcelin. Just think, the club could still have him patrolling the field.