Somwhere in the offices of MLS, the newly formed Chivas Crisis Unit is holding an emergency meeting:

Lawyer 1: What?? That's impossible. Who hired coaches without verifying their I-9s??

Lawyer 2: Apparently Jorge Vergara and/or his employees told Cynthia Craig, one of their HR personnel, to ignore all those requirements.

Lawyer 1: Well they at least did everything else legally right?

Lawyer 2: Umm... no. Apparently said had to be paid through circuitous and confusing routes in order to hide their tracks.

Lawyer 1: Bring me Johnnie Cochran. This will the last and most glorious stand of the Chivas Crisis Unit.

You can bet that it goes downhill from there. More than one laptop will be thrown against the wall in a fit of rage. Can you imagine being the counsel assigned to the task of deciphering the legality of Chivas USA's byzantine hiring practices? If I was a lawyer, I'd consider quitting my practice for something less stressful. Testing parachutes might hold more attraction than having to deal with this mess.

Feel free to read about the new lawsuit here, on the Daily Breeze. Here's a choice line from the article (I recommend you go and read the whole thing).

"Her suit also charges that, starting in January, Chivas hired four coaches from Mexico even though they were not authorized to work in the United States. According to the suit, Craig was told to add the coaches to the payroll but she refused, and team executives instead routed them money through other means.

This would be funny if it wasn't so terribly shifty. Yes, "innocent until proven guilty" and all that, but unless this Cynthia lady is completely dotty, I expect there is some truth to what she's saying. Even some truth to those statements would have pretty ugly legal consequences. Of course, it could get nowhere (legally speaking), but how much longer does MLS let this sort of thing go unanswered?

There is a buffet's worth of egg on MLS' face over this, even though your average informed fan knows that this isn't the league's doing. Someone has to stop Vergara.

Someone has to. As soon as he gets the chance, I expect Vergara to put on a cape, a top hat, twirl his curly mustache, and tie young non-hispanic players to the train tracks and laugh.

Then Don Garber will say "We don't comment on ongoing train-track related litigation at this time". Not good enough!

- Walker Zimmerman sure is injured a lot. It's not like the kid is made of glass (though it doesn't help he arrived injured and then reinjured himself). Sometimes these things are nothing more than bad luck. It still makes me feel uneasy though, especially when Hyndman hints there is a mental component to this injury recovery. I hope the goal scoring, mastodonic attacker-smasher we saw early on can make it back onto the field.

- Some people would be okay selling/trading Raul. I don't want to sell Raul. I want to build him his very own Machu Picchu, make him King, and keep him here forever. If you want to move him for any sum of money, I now hate you and we can't be friends.

- Dax McCarty is a funny guy. During his reddit AMA, someone asked him about Red Bull in the locker room. His response is listed below (screencap courtesy of Devin Pleuler). 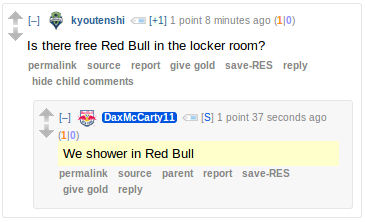 - Is anyone else here excited for Splinter Cell: Blacklist or GTA V? I am.