Is Erick The Defensive Midfielder Hyndman Has Been Searching For?

In just 67 minutes on Sunday, Erick showed that he could be a big time player as FC Dallas makes a push for the playoffs.

Share All sharing options for: Is Erick The Defensive Midfielder Hyndman Has Been Searching For?

There has been no secret about it, FC Dallas manager Schellas Hyndman loves playing in a 4-4-2 formation. But for years he has never been able to do it in Frisco thanks largely in part to the players that he has had on his team. Either he was missing a second striker, like he was a year ago when the team had Julian de Guzman in the defensive role. Or more recently with the club missing a true defensive midfielder.

Now Hyndman feels he may have his guy in newcomer Erick, who made his debut this past Sunday against the LA Galaxy. The Brazilian went 67 minutes in the wild 3-3 draw, but Hyndman already could see glimpses of what could help move his formation to a 4-4-2.

"He's exactly what we've been looking for - a true holding midfielder who has a little bit of bite," Hyndman told the media after Sunday's game. "He's athletic and makes good passes."

The only downfall right now with Erick is his fitness. He came into Frisco during an offseason like most foreign players do in the summer. Once he got into camp he picked up a hamstring injury that sidelined him for a couple weeks, delaying his debut with the club.

"With 10-15 minutes left in the first half, they were getting through us, and Erick was cramping already, so the fitness level is something that concerned us," said Hyndman. "But once he got tired people were running by him, and I felt like we had to get him off the field."

Overall on the night against LA, Erick wasn't amazing by any stretches. But he did what you need to do as a holding midfielder, win the ball, keep the pressure off the defense and don't give up any silly passes in the open field. Judging by his chalkboard numbers, Erick did just that.

On the night he had 20 successful passes to just two unsuccessful (one of those bad passes was a long ball that went out of bounds for a throw-in deep in LA's defensive half). He only lost possession twice but also conceded three fouls. Erick had four interceptions and one clearance as well, showing that he can do some grunt work. 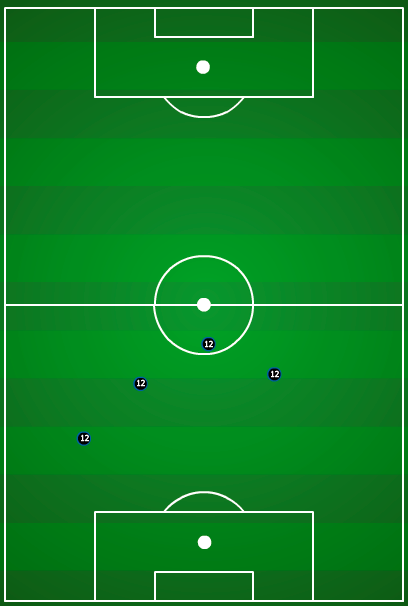 Above is a quick look at his four interceptions. It may not seem like much but that is exactly where you want a defensive/holding midfielder to win balls on the field. Only one is really in the defensive third of the field while the rest are in the middle of the park. All four were in the first half, which isn't a shocker considering how his fitness barely got him through the first 15 minutes of the second half.

The good in all of this is that Erick will push guys like Andrew Jacobson, Je-Vaughn Watson and Michel to better themselves if they want to be in the lineup. A move to a 4-4-2 would mean some serious roster battles for that bottom of the diamond portion of the midfield that Erick would likely control.

The bad in all of this is that Erick is probably a few more weeks away form being truly 90 minutes fit for this club. But that may be alright as the playoff push heats up for the club here. Things are still close in the Western Conference so anything is still possible at this point.