Dallas hasn't won a game in LA since the 2010 MLS Cup Playoffs, when they knocked off the Galaxy in route to their first MLS Cup trip. The Galaxy are 3-0-1 since that game at home against the Hoops. Dallas only has five regular seasons win all-time in LA.

Dallas knocked off the Galaxy earlier this year in April, in a dramatic 1-0 game that saw two penalty kicks saved and a late George John goal.

0-1-4. No wins since the end of May when Dallas beat San Jose 1-0 at home. Three straight draws isn't a horrible thing but it shows that the team isn't winning or losing. In the MLS Cup run of 2010, the club had a slew of draws that year, so this isn't something new under Schellas Hyndman.

Super Raton. Tonight's match will be the last game with forward Blas Perez for the next couple of games. Perez will be joining Panama later tonight after this match as they are in LA playing Mexico later today as well. Perez opted for club over country today. Perez has three goals in his last five games for Dallas, including two game-tying goals.

Michel's importance. Worth bringing up once again, the Brazilian has helped contribute to 14 of Dallas 27 goals this season. He also had three assists in the US Open Cup as well. Dallas would be wise to make the most of his services tonight.

Thankfully for Dallas, both they and the Galaxy are coming into this game on short rest. The Galaxy won their July 4th match at home against the Columbus Crew thanks to two Robbie Keane penalty kicks late in the match. Yes, two penalty kicks to win the match. Fun.

LA is a team that loves to control the midfield and work the ball in a direct manner up front to Keane or Homegrown forward Gyasi Zardes. Without Landon Donovan in the attack (he's out on Gold Cup duty), the Galaxy may turn more to Robbie Rogers on the left wing and Juninho in the middle of the field to get the ball moving forward.

The Galaxy have been hot and cold over these last few weeks. In their last six games, they are 2-3-1. If that trend continues tonight, it could be a good thing for Dallas as the Galaxy haven't won back-to-back games since the middle of April.

Arena will likely use a fairly similar lineup that he used on Wednesday against Columbus. He could opt to use some of his depth but given how these 11 played, it makes sense to keep the momentum of the win going tonight against Dallas.

No John or Zimmerman tonight for Dallas 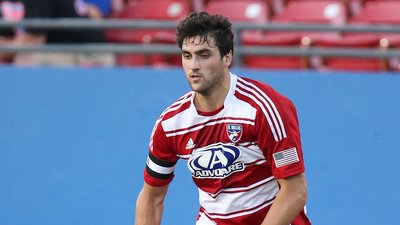 FC Dallas will go to LA without both George John and Walker Zimmerman. /span>

Watch for counters, but make the most of your own. LA is a team that loves to score on the counter attack. Given how they have the league's leader in fouls committed (Marcelo Sarvas), you can expect him to foul David Ferreira or others in the midfield, which means Dallas will push numbers forward. That also means that if Dallas doesn't score on those set pieces, that they better do a good job at getting back on defense because the counter attack tends to be the Galaxy's bread and butter.

Play Keane smart. Keane is a very intelligent player, if you saw them beat Columbus on Thursday you'll understand what I am talking about. But if you didn't, I'll clue you in. He drew both penalty kicks just by being himself, working hard in the penalty box and drawing the contact from the other defenders. You can't give him a ton of space but at the same time you can't play him too physical as he is smart enough to go to the crowd when there is contact.

Speed on the wings. One thing LA has always struggled with is speed on the wings and in the attack. That is a good thing for Dallas as they have plenty of that with Fabian Castillo, Jackson, Je-Vaughn Watson and Ramon Nunez. Dallas will want to spread out the attack and force the Galaxy full backs out of position as much as they can. One thing they can also hope for and even count on is the wide midfielders to track up the field more than necessary. That will help expose the back line a bit more as well.

But with the speed on the wings, Dallas will need to play some quick balls to Perez and Ferreira in the middle. Their holding abilities and distribution back out wide is going to be key in getting quality chances tonight.

Taking chances. Speaking of chances on goal, Dallas has to not only make the most of what they are given but take a few more risks in the attack tonight. One thing they failed to do against Chivas was put the ball on the goal to test the keeper. I'm not totally convinced that Carlo Cudicini is a good enough MLS keeper, so Dallas just needs to test him as much as possible as he has slipped up a few times this season, costing the Galaxy points.

I want to say this one will be easy and Dallas will win but it won't be the case. The history in LA for Dallas isn't good and with the short rest, the lack of George John in the defense and the lack of momentum from Thursday plays out of their hands and likely into the Galaxy's. I think a draw would be a big coupe for this club on the road here and it is certainly likely but I'm not counting on a result tonight. LA isn't great at the moment but they'll do just enough to get the three points tonight.