The United States coasted through to the finals thanks to a 3-1 beating on Honduras. Landon Donovan scored two and assisted on one to help the Yanks move on.

The United States will face a surprise team in the finals as FC Dallas' own Blas Perez scored a goal in the 16th minute to help Panama upset Mexico in the second semifinal of the night. Panama downed Mexico 2-1, surprising and throughly upsetting the massive pro-Mexican crowd in Arlington.

The 3-1 scoreline was pretty convincing for the US team on the night. While Jurgen Klinsmann was whistled out of the building in the second half for spiking the ball on the field, his team controlled the game with Honduras. Donovan was the main reason for that with his two goals on the night. Former FC Dallas forward Eddie Johnson got things started early for the US with an assist from Donovan.

Honduras' Nery Medina made the game 2-1 early in the second half with a header via a corner kick, only for Donovan to answer back a minute later.

Klinsmann stuck with a center back duo of Matt Besler and Clarence Goodson for this one and it paid off as Honduras rarely got through to Nick Rimando's goal.

Real Salt Lake midfielder Kyle Beckerman was solid in the middle of the park for the US on the night as well, proving that he can hang with some of the regions best players on any given night.

But the story was all about Donovan. His two goals were his 17th and 18th in all Gold Cup competitions in his career.

Things got lively quick between Panama and Mexico on Wednesday night in Arlington. Panama came out focused and confident in this one and it showed early on as Perez scored a beautiful near post goal early in the first half.

Mexico would respond before halftime with a goal from Marco Fabian.

But as the second half rolled in it was Panama again with the surprise goal. Central defender Roman Torres got the game-winning goal in the 61st minute, ghosting past Joel Huiqui to nod home just inside the back post off a corner kick.

Panama's win marks their first return to the finals since 2005, when they lost to the US on penalties. Mexico and the US have split the last six Gold Cups with three wins a piece. Panama will be looking for their first title.

Other thoughts on the night:

- Very cool for me to sit in the crowd for a change and not in the press box. A good friend of mine got great seats near one of the corner flags and it was well worth the hassle of sitting through traffic and all the craziness to get there for it.

- Ironically, the section we were in was the same section as the FC Dallas players in attendance. Nothing beats players like Andrew Jacobson, Bobby Warshaw, Kenny Cooper, Jonathan Top, Michel, and Walker Zimmerman all stopping to say hi randomly during the two games.

- Also, it was great to see the players reaction to Perez's goal. They were easily the first people on their feet cheering for their teammate when he put one in on Mexico. 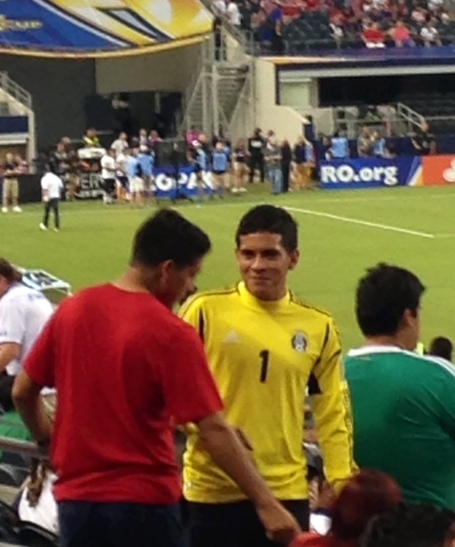 - Fun crowd on hand for this one though there were a lot of idiots throwing crap during the Mexico-Panama game. A lady two rows in front of me got pegged with a full bottle of water or something.

- As great as it was to see Brek Shea, he added very little to the US attack. Even DeMarcus Beasley was barking at him to change his runs and passes up.