Who needs who more?

Share All sharing options for: Part 2: MLS v SGs - The Fine Line We (Both) Walk

In Part 1 (go check it out here), I talked about the attempts by Major League Soccer and certain clubs to clamp down on the YSA chant. Now I'd like to take a look at the sometimes precariously fine line that MLS and SG's both walk and the at times tenuous relationship the two have with each other.

Is there a clear cut path for both MLS and SG's to get along? Some will argue that MLS is the league and they make all the rules, if you don't like the rules then don't come to games. Fair point actually. MLS has a Fan's Code of Conduct and people are expected to follow these rules or else. Clear cut right? Kinda.....

Major League Soccer is committed to creating a safe, comfortable and enjoyable soccer experience for all guests in and around our stadiums.

MLS fans have a right to expect an environment where:

*NOTE: The use of streamers and confetti as an expression of fan enthusiasm is not prohibited, but will be kept under review. Streamers are not to be used to impact the competition and/or thrown at or toward a player, referee or stadium staff member.

FAILURE TO ABIDE BY THIS CODE OF CONDUCT IS SUBJECT TO SANCTIONS, INCLUDING EJECTION, BANISHMENT AND ARREST.

MLS and its Clubs thank you for adhering to the provisions of this Code of Conduct and for making this event special and memorable to you and your fellow patrons.

Major League Soccer values the support of every one of its fans. MLS pledges to protect a fan's right to:

Everyone has a right to enjoy a public sporting event and the rules clearly state that no use of foul language is to be used. It also states that "Fans are encouraged to cheer, sing, and otherwise support their team while remaining respectful and courteous to their fellow patrons, referees, opposing team fans and players.".

That all sounds nice and good and if we lived in a perfect world where sporting competition (and alcohol) didn't breed passion in it's audience then this would work. But lets be honest with ourselves, this is the real world. Am I not allowed to boo a refs decision? Or an opposing player? Where does the line get drawn? 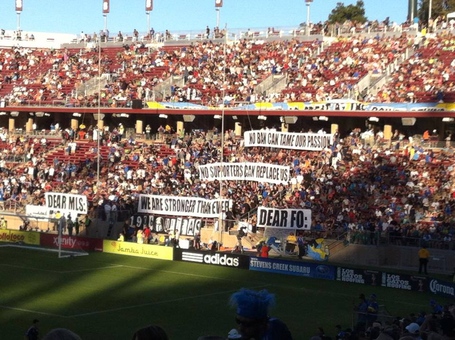 For a while it seemed that the line was drawn (with SG's anyways) at the YSA chant. Then last year the Colorado Rapids took policing fans to an entirely new level.

Long time Rapids supporter and member of the Pids Army Supporter's Group Teddy Montoya received a letter from Kroenke Sports Enterprises (Rapids ownership group) banning him for life from any and all Rapids functions......for swearing. Did Teddy drop f-bombs in the family section or even a section where kids could hear his cursing? Not even close.

For those who've never been to Dick's Sporting Goods Park they have a setup similar to the Beer Garden at FCD Stadium. Their main SG (now known as C38) is segregated from all other parts of the stadium and is 18+ unless accompanied by an adult . To be clear we're not talking about a person being singled out during a chant. We're talking about 1 person in a sea of supporters being BANNED FOR LIFE because of swearing in a section that's designated for a Supporter's Group.

Prost Amerika had a great write up about the incident and even spoke to Teddy after this all happened. There are several disturbing things that this report brings to life. The most troubling to me is that the team not only keeps individual records on supporters but offered no warning of any kind before handing out a lifetime ban to a season ticket holder.

[A KSE employee] told him (Teddy) that multiple incidents had been recorded in a file on him, a file kept unbeknownst to Montoya.

If the thought of a football club keeping secret files on individual supporters is not startling enough, Montoya observed that the secrecy means he has been charged and found guilty on previous occasions without his knowledge.

He says he was deprived of the right to give evidence or even know there was an accusation. Yet these incidents are permitted to contribute to a situation where he is one F-Bomb away from a life time ban.

No DSG Park is not a democracy but no warning after multiple accusations? What type of message does this send to potential fans? Big Brother is watching and knows all that you do.

This became a PR black eye for KSE and "Free Teddy" became a rallying cry for many SG's across MLS to point to when talking about league/club heavy handedness.

Even the Rapids hated enemies in Salt Lake showed their support. 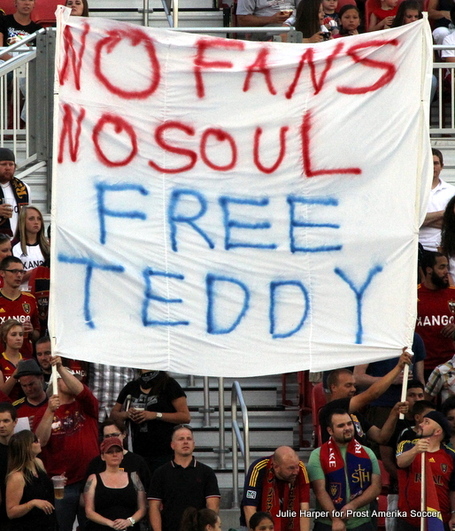 These are images that MLS didn't want to see popping up at their games and a year later KSE capitulated and, as I understand it, this past June Teddy was allowed to return to DSG Park.

While "Free Teddy" banners aren't what the league wanted to see they rarely shy away from using images of SGs and frankly that rubs many people the wrong way. Watch any televised MLS match and the advertising is full of SG images. 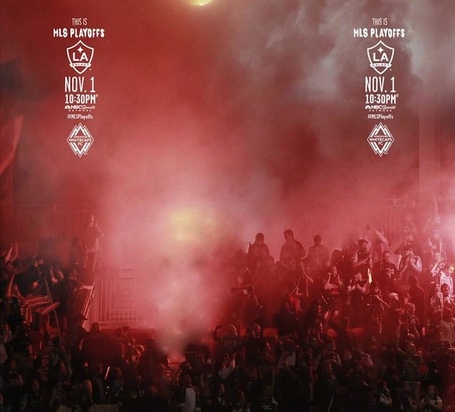 This announcement from MLS about Portland being awarded the 2014 All Star game is heavily laced with SG images.

MLS wants to show an exciting and crazy atmosphere while at the same time trying to mold SG culture into their view of what it should be. A middle ground MUST be found in order for both the league and SG's to coexist. While SG's have to understand that maybe screaming curse words in unison isn't ok, MLS must also understand that you can't have your cake and eat it to. You can't heavily promote a wild and crazy time at the stadium while telling those same people to tone it down. If MLS isn't careful they are going to drive away the fans that not only show up in big numbers themselves (and spend a lot of money) but drive the atmosphere that brings in the casual fan as well.

I'm not going to hand all of the credit to the SGs but at 400 members strong and over 150 season ticket holders I am damn proud that the Dallas Beer Guardians have been a huge part of that growth. At the very least the SG's at FC Dallas have created an amazing atmosphere that drives people to games. We're the fastest growing area for season ticket holders and that's something that the front office has stood up and taken notice of and so should the league.

After the bottle throwing incident in April, FC Dallas banned any covering of your face anywhere in the stadium. Yet the team continues to sell FC Dallas hockey masks in the gift shop THAT YOU CAN'T EVEN WEAR AT THE STADIUM! It makes no sense to me to market something to kids/fans and then not even allow them to wear what you're selling. 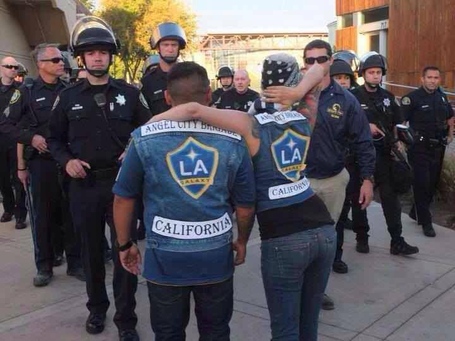 If there a good answer to all of these issues? No. Do SG's, clubs, and the league all need to share in responsibility to continue to grow the atmosphere of MLS games? Absolutely. Working to find a middle ground that creates a friendlier setting for family's, helps to sell tickets, builds the game day atmosphere, and doesn't extinguish the passion and fire that supporter's groups bring to games should be the goal of all sides involved.

Who needs who more: SG's or MLS? The answer: yes.