By The Numbers: FC Dallas At The Halfway Point In 2013

FC Dallas is officially on the back half of their 2013 schedule starting Thursday against Chivas USA. But let's look back at what the first half of the year brought us.

Share All sharing options for: By The Numbers: FC Dallas At The Halfway Point In 2013

Back in February if you asked me if FC Dallas would be sitting at 30 points through 17 games I probably would have laughed a little at you. Then again I knew deep down that if this club were healthy for long stretches of this season that anything would be possible. But after 17 games what seemed improbable turned true, 30 points, a solid 8-3-6 record on the season, good enough for third place in the league. 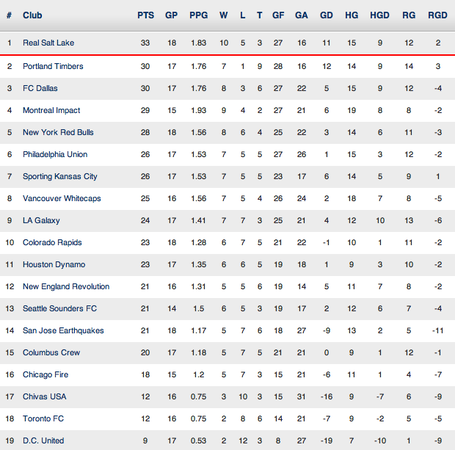 Not bad folks. Not bad. A strong record with 1.76 points per game is very nice to see at this stage in the season.

Goals: Blas Perez leads the team with six goals on the season. Not shocking to see Super Raton lead the way already at this point in the season despite missing a few games with national team duty. Jackson, Kenny Cooper and Andrew Jacobson are tied with three goals apiece as well. So far 11 players have scored for the team this year with seven of those finding the net more than once.

Game-winning goals: Fabian Castillo leads the way here with two on the season. I bet you didn't expect to see his name leading this category huh?

Assists: This has been the more interesting race in my book. David Ferreira leads the way with six assists while Michel is right behind him with five of his own. One could argue that Michel should have a few more assists as he has directly effected a number of goals this season.

Shots: Dallas has taken a boat load of shots this season, 212 to be exact. Oddly enough that is only good for 12th in the league. Where Dallas is making their mark though is shots on goal/target, a category that they are second in the league in, just behind Real Salt Lake. Currently Jackson leads the way with 37 shots/10 on target. Right behind him is Kenny Cooper 28 s/16 ot, and Blas Perez 26 s/16 ot.

Fouls Suffered. Naturally Ferreira leads the way in this one both in the club and in the league. He has been fouled 50 times in just the 15 games that he has played this season.

Fouls Committed. Jackson leads the way in this department for the club with 34, good enough for sixth most in the league.

Offside. Cooper leads this department with 14, good enough for seventh most in the league.

Saves. Raul Fernandez is the obvious leader in this area with 58 saves on the season, good enough for third place in the league.

Shutouts. Currently Dallas has six shutouts on the season with Fernandez grabbing five of those.

Shutout streaks. The longest streak so far this season for Dallas was back in April when the club went 252 minutes without giving up a goal.

Road record. 1-3-4, good for 12th best in MLS. All three losses on the season have come from the road as well.

Home goal scoring totals. 15 for and six against. Good for third most scored and third best in terms of goals allowed.

Road goal scoring totals. 12 for and 16 against. That is third most scored in the league on the road and second worst against.

Losing streaks. Thankfully FC Dallas has yet to lose back-to-back games this season.

Below are Hyndman's historical stats at the halfway point (for this article I am leaving out his 2008 stats, since he took over in that season):